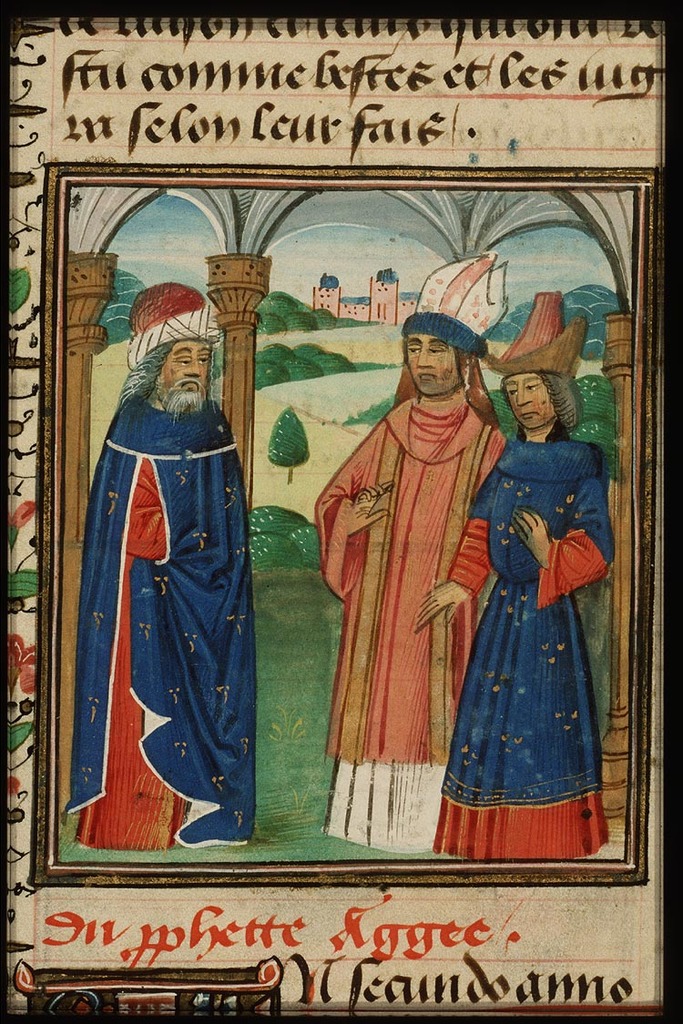 The Prophet Haggai’s fourth and final sermon was also delivered on December 18, 520 BC.

The word of the Lord came a second time to Haggai on the twenty-fourth day of the month.

The prophet was most likely addressing all the faithful as they were leaving the temple area after their evening worship and prayers.

Though this is the shortest of Haggai’s oracles, it is surprisingly dense!

Haggai can best be remembered with the bee, for bees build their home for their queen, honey was a symbol of God’s blessing, and as a swarm would do, God promised to drive their enemies away.

“I am about to shake the heavens and the earth,

“and to overthrow the throne of kingdoms;

“I am about to destroy the strength of the kingdoms of the nations,

“and overthrow the chariots and their riders;

“and the horses and their riders shall fall, every one by the sword of a comrade.”

It was a hair-raising prophecy, without any time markers or context. Its global character marks it as eschatological, having to do with the end of all time, the final conflict that will usher in the new heavens and the new earth. Because of this, God’s final word to Zerubbabel is also to be understood as far future (to him, but now far in the past to us).

A Word To Zerubbabel

(says the Lord of hosts,)

“I will take you, O Zerubbabel my servant, son of Shealtiel,

“and make you like a signet ring; –for I have chosen you-,”

(says the Lord of hosts.)

This is the very last line of Haggai’s slim volume of two chapters. As the last line, it is heavy with significance.

But, what does it mean?

Well, we have to get a handle on who Zerubbabel was, first, before we can take in the importance of God’s saying.

Remember when I initially described Zerubbabel? He was known as the son of Shealtiel, born in Babylon in the royal line of David through David’s son Nathan, whose name would one day appear in the genealogy of Jesus. For these reasons, some scholars have thought Sheshbazzar the prince of Judah (to whom Cyrus had entrusted the sacred temple treasure) might be one and the same person with Zerubbabel.

However, in both Ezra’s chronicle, and the prophets’ mention, Zerubbabel is consistently referred to as governor rather than prince or king.

This does not—necessarily—mean Zerubbabel was not a prince, or in the line of David. It also does not mean Zerubbabel and Shesbazzar were the same people. As a matter of fact, I highly doubt that idea, as it indicates:

Here is what I mean.

I will hurl you and the mother who bore you into another country, where you were not born, and there you shall die. But they shall not return to the land to which they long to return.

Is this man Coniah a despised broken pot,
a vessel no one wants?
Why are he and his offspring hurled out
and cast away in a land that they do not know?
O land, land, land,
hear the word of the Lord!
Thus says the Lord:
Record this man as childless,
a man who shall not succeed in his days;
for none of his offspring shall succeed
in sitting on the throne of David,
and ruling again in Judah.

And this infamous King Coniah (also Jeconiah) was none other than Zerubbabel’s grandfather!

Look through everything God said to this man (the first thing is the most significant, as it creates a bridge from Jeremiah’s oracle to Haggai’s oracle).

This is the heavy family legacy laid upon the shoulders of Coniah’s heirs, and borne out in Judah’s post-exilic history.

And then we come to Matthew’s gospel.

. . . and Jacob the father of Joseph the husband of Mary, of whom Jesus was born, who is called the Messiah.

God would redeem the family baggage Zerubbabel had gotten saddled with. Though King Coniah and his descendants would never again have the royal inheritance they had been born into, yet Zerubbabel would be given the highest honor, for he had been faithful to God. He would one day be included in the line of Jesus Messiah, the True Signet Ring, the Chosen of God. (Luke’s gospel also mentions this remarkable fulfillment of prophecy.

Celebration of the Temple’s Completion

No more oracles or sermons are recorded from Haggai, though we can assume he continued to work side-by-side with the leaders and the people until the last hewn stone and sacred vessel had been completed and put into place.

Then, according to the word sent by King Darius, Tattenai, the governor of the province Beyond the River, Shethar-bozenai, and their associates did with all diligence what King Darius had ordered.

So the elders of the Jews built and prospered, through the prophesying of the prophet Haggai and Zechariah son of Iddo.

Five years after Haggai had begun to prophesy, they finished their building by command of the God of Israel and by decree of Cyrus, Darius, and King Artaxerxes of Persia; and this house was finished on the third day of the month of Adar, in the sixth year of the reign of King Darius.

The people of Israel, the priests and the Levites, and the rest of the returned exiles, celebrated the dedication of this house of God with joy.

The people of God would now begin a new chapter of life in the Promised Land.