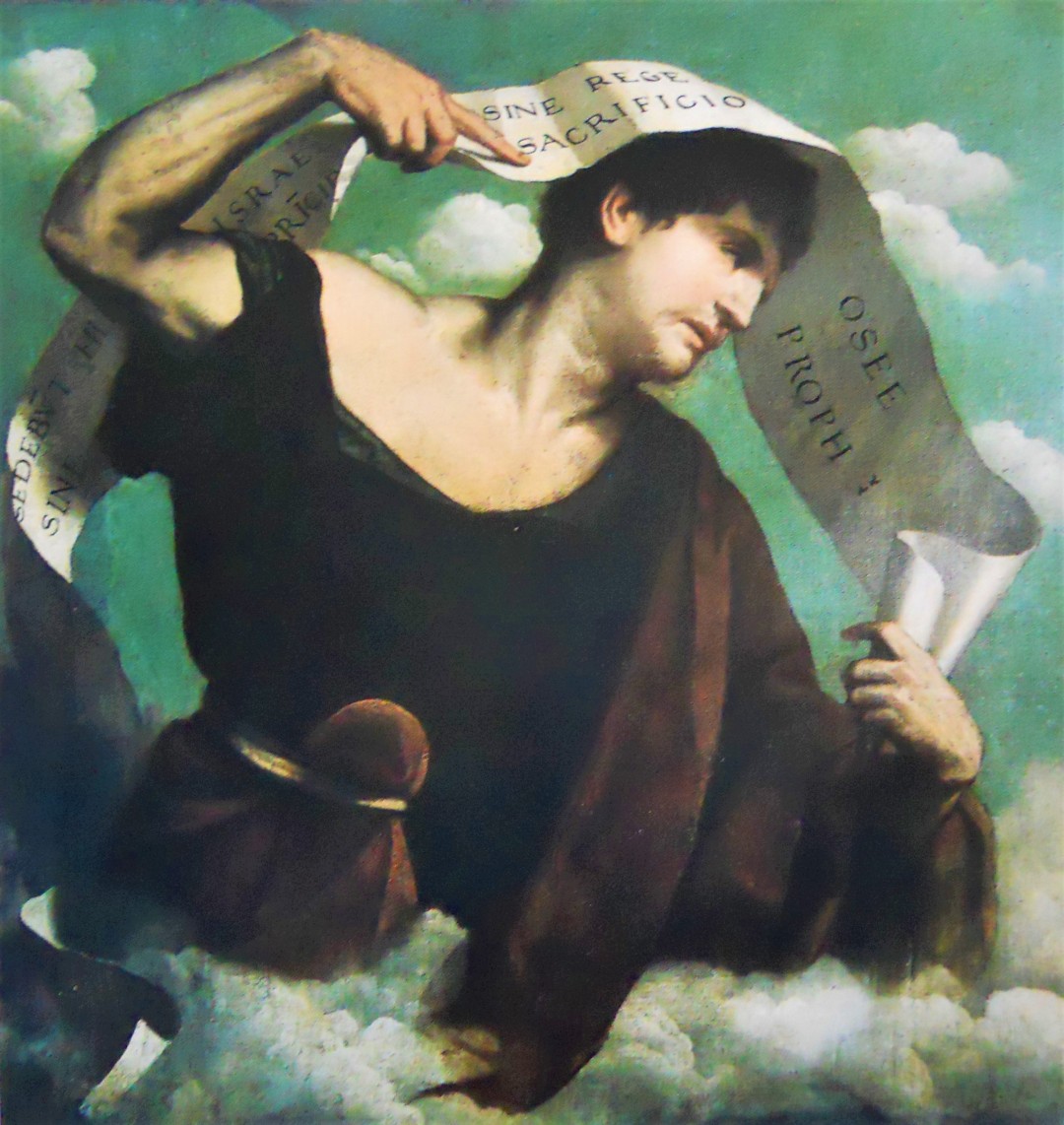 Hosea son of Beeri was a teen at the end of Amos’ time in Israel. Amos had prophesied during Jeroboam II’s long and stable reign, during the wealthiest time in all of Israel’s history since the days of Solomon. There were ivory palaces, the land – and the people – were fat and flourishing, flowing bowls of wine, heavy clusters of olives and grapes, they never had it so good as this. Except that they were also corrupt.

Hosea picked up right where Amos left off, at the end of Jeroboam’s reign. Over the course of about 40 years Israel totally changed from a stable government to bloody intrigue. Four kings were assassinated in succession, each by their replacement. Their last king was captured in battle and thrown into the horror of an Assyrian prison. Israelite wealth was siphoned off into tribute to Assyria, and Israel itself “fluttered like a frightened dove,” first to Egypt, then to Assyria for help against their growing list of enemies.

There was anarchy and distress – think about all the purging and murdering that happened every time a new king came to the throne.

Theirs was a degenerate age, a calumnious culture filled with cursing, lying and bloodshed, stealing and adultery. They broke all bounds of law and decency, the environment was becoming polluted and corrupt. Prophets stumbled along with the people, priests fed on the sins of the people, relishing their wickedness.

You’ve heard of gang violence. In Hosea’s day the gangs were made up of -clergy- who butchered people on the road and committed crimes so shameful Hosea couldn’t bring himself to name them.

Houses got broken into and robbed on a routine basis, thieving and mugging in the streets happened every day, people could never trust the merchants and businesses because defrauding the consumer was common practice. Political leaders were filled with a hot lust for wickedness, deceitful practices and violence. Over all was a constant state of blanket terror that Assyria would one day overrun their country, brutalize them, destroy their fertile fields and lush cities and sell whoever was left into grinding slavery.

And then there was the idolatry.

It had now become so rampant, there were incense altars and prostitutes under every shady tree. Nearly every family had burned at least one child alive in the arms of Ba’al. They were so given over to fornication of every variety that whole families joined in, daughters, wives and mothers, little boys and girls all did their turns as temple prostitutes.

Husbands, sons, fathers and brothers came to fornicate with them. Somehow they thought this would fertilize the land and make it rich for planting and harvest. In this way God’s gifts of wealth and abundance were attributed to their own licentious behavior in acts of despicable worship to idols their own hands had fashioned from wood.

It is against the backdrop of this kind of society that the story of Hosea and Gomer took place.

Imagine Hosea, conservative, thoughtful, he loved to worship at the synagogue, to pray and talk about the Lord.

Maybe Gomer was popular, pretty, flirtatious, bright and sunshiny. She loved a party! She went to synagogue, too, because everybody did, everybody was religious. But she also went with her family to the high places, where all the festivals and New Moon rituals were celebrated. She hadn’t been a temple prostitute yet, but all her girlfriends were talking about it.

Hosea wrote his story retrospectively. As a young man, Hosea might have prayed and asked God for a wife, if he wasn’t already promised from boyhood to the daughter of a family friend. It was the usual way for fathers to arrange these things

Imagine Hosea’s surprise when he received God’s specific direction to marry Gomer, the beautiful yet morally censurable daughter of Diblaim.

When the Lord began to speak through Hosea, the Lord said to him,

“Go, marry a promiscuous woman and have children with her, for like an adulterous wife this land is guilty of unfaithfulness to the Lord.”

Can you imagine Hosea’s conversation with his parents? They undoubtedly had always hoped their son would marry a virtuous and godly young woman who would love him faithfully, worship the Lord together with him, support him in his every endeavor, and raise a beautiful family with him.

Surely they were horrified, knowing exactly the kind of family Gomer had been raised in, and indeed her own openly licentious and idolatrous behavior spoke volumes on what life would be like with her.

Really, father, I distinctly heard the voice of the Lord speaking to me. Almighty God has commanded me to marry Gomer. I swear it!

But how can you say that, son, his mother might have cried. This is entirely against all we know of the Lord’s commands, and of His law. Would the Lord speak to you against His own written commands?

Certainly they would have pled with him, showed him scripture after scripture from the King’s Proverbs they felt would dissuade their noble, spiritually intense son, knowing his great love for the Lord, and his longing to obey God in all things.

Wisdom will save you also from the adulterous woman,
from the wayward woman with her seductive words

For the lips of the adulterous woman drip honey,
and her speech is smoother than oil;
but in the end she is bitter as gall,
sharp as a double-edged sword.

They had many, many more.

Finally, perhaps, in a desperate move to save their son, Hosea’s father might have thundered, “The mouth of an adulterous woman is a deep pit; a man who is under the Lord’s wrath falls into it. Folly is bound up in the heart of a child, my son,” then reaching for his staff, “but the rod of discipline will drive it far away.”

Who knows. Maybe Hosea did have to endure the strikes and lashes of his father’s staff as he obdurately refused to change his mind, or his story.

God has commanded this of me, and I must do it.

Hosea realized that what God was asking of him was to

Hosea understood he was to portray the Lord God Almighty, Who had taken to Himself, out of pure love, Israel who had become unfaithful to Him. God called Hosea to love Gomer even though she would shame and disgrace him. To be faithful to her no matter what. Hosea’s marriage would become a picture of how God loved Israel.

They had three children:

Jezreel, whose name meant God would scatter His people in judgement (but one day God would plant His people again),

Lo Ruhamah, because God would not longer cover His justice with pity (but one day God would restore His loved ones),

Lo Ammi, because God would stop regarding Israel (but one day His people would be called sons of the Living God).

What a heavy burden this young man, perhaps only 18 or 19, had to face as he drank to the dregs the marriage cup with Gomer, under their wedding canopy that night. His life would soon become a crushing despair to him.