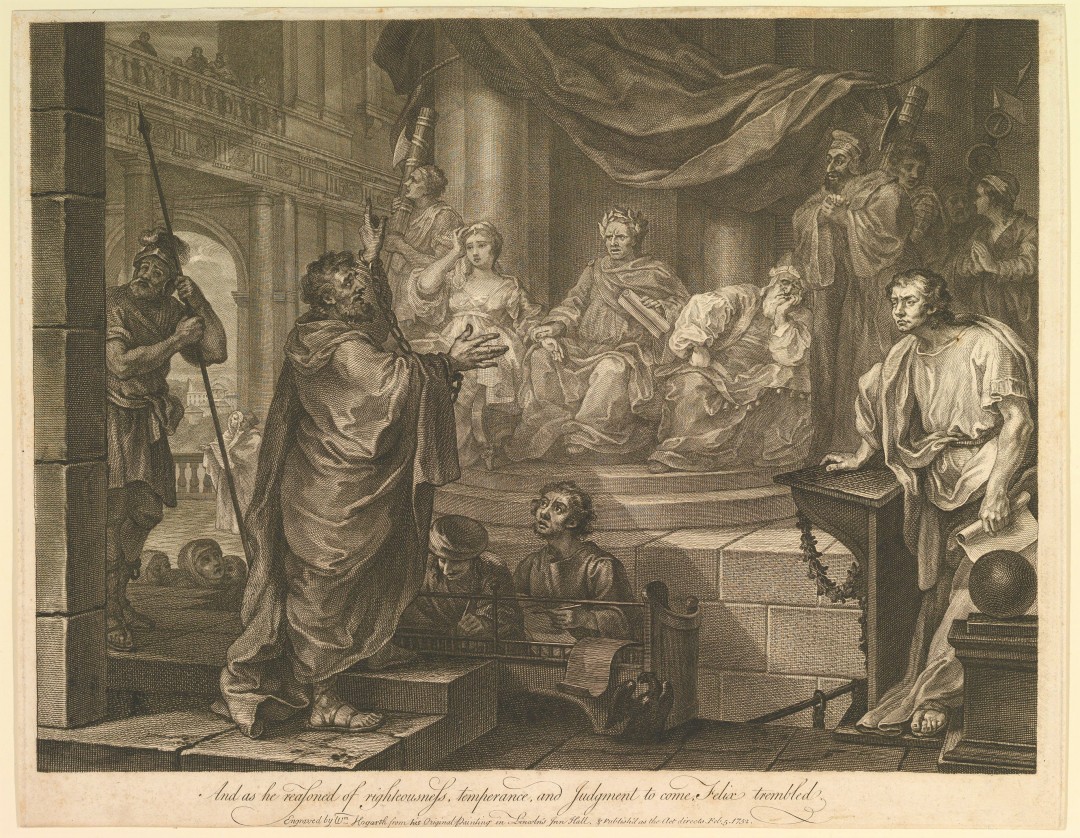 One of the fascinating aspects of these two chapters in the epic of Paul’s missionary journeys is the backstory of royal family drama. It seems God made a special point of bringing the gospel to three generations of the Herodian dynasty. I find myself wondering if at least some of them did eventually embrace Christ and the Way.

Herod the Great was the king of Palestine from 37 – 4 B.C. (Luke 1:5) and it was he who ordered all the baby boys up to two years old in Bethlehem be put to death. He is also the builder of fame, who created the port city of Caesarea, as well as the renowned gigantic temple and palace complex upgrade in Jerusalem. Herod never was able to choose a successor because he could not stand to think of a day when he might have to hand over rule of his kingdom. He left his last will and testament in public disarray, with at least two sons contending for his throne.

Disgusted, Emperor Augustus finally apportioned the commonwealth of Palestine into three provinces, to be governed by three of Herod’s sons, refusing to allow any of them the title of king:

This is the same Herodias who had had an affair with Herod Antipas, then in quick succession both divorced their spouses and moved in with each other in Jerusalem, thus precipitating the cascade of events that culminated in John the Baptist’s death.

I tried to imagine what life must have been like for those orphaned brothers and their sister, in such a turbulent household, where everyone walked on eggshells, for fear of being killed. Surely they knew their grandfather had murdered his own son, their dad. Children who suffer trauma together tend to develop very deep bonds, as they cling to each other, trying to cope with their frightening, unpredictable, and often dangerous existence.

Outwardly, they were the pampered darlings of a fabulously wealthy grandfather. Inwardly, they were alone in the world, potentially political threats to their avaricious uncles, and lacking in any other benefactor.

It was the children of Herod Agrippa I who all played such important roles in Acts 24 – 25:

Luke had documented Governor Felix’s extensive knowledge of Christianity, and that he had married into the Herodian family. For two years, for at least mixed reasons (he was hoping for a bribe), Felix spent much time with Paul, and perhaps so did Drusilla.

Remember that Felix had been recalled by emperor Nero under a dark cloud. Evidently, Felix’s habit of graft, receiving bribes, showing favor to whomever could give him the most political power and financial renumeration, had caught up with him. No stranger to cruelty, Felix was known for his swift and savage suppression of uprisings, and though he granted civic privileges to the Judeans, he also brutalized any who rebelled.

The emperor Nero finally yanked Felix back to Rome when a delegation from Caesarea’s Syrian community had gone to Rome’s imperial court to lodge a formal suit against Governor Felix for his mismanagement of their region.

Early in his procuratorship, the much older Roman freed slave Felix, had met and married the beautiful sixteen-year-old Herodian granddaughter Drusilla (though he refused to receive circumcision or adopt the Jewish religion). Within Felix’ region of Caesarea there were also a notable number of the Roman army who had pledged faith in the Way, founding at least one thriving Christian community near the palace. Through these two sources, it comes as no surprise that Felix was amply fortified with knowledge of Judaism and the Way.

But Festus did not have the luxury of those connections.

A man of action, not three days after arriving in Palestine he was talking with the Sanhedrin about Paul, and within the week experienced a replay of the turbulent trial Paul had undergone before Felix. With Paul’s demand for a court hearing before the emperor in person, Festus found himself up to his ears in proverbial alligators. Who did he have to turn to for advice and at least -some- insight into the background history of this religiously and politically explosively divisive issue?

Dare we say it was a Godsend that Agrippa II and Berenice had sent word they were on their way for a state visit? And of course they would have wanted to find out something about Festus. It had to have been terribly upsetting and disruptive to have Felix, without warning, removed from office and recalled to Rome. Not only was he family now, but their beloved sister Drusilla had had to accompany him, tearing their family apart. I can only imagine their fear and distress, wondering what would happen now, with the unpredictable Nero in royal high dudgeon.

Now they would come to see who would be occupying the opulent seacoast palace and pleasure grounds of Caesarea, which had begun to feel like a second home to them.

Festus must have felt a huge wave of relief, knowing Agrippa and Berenice could give him the full story, tightly knit as they were with Felix and Drusilla. It made all the sense in the world for him to wait just a few days for their arrival, then have them help him adjudicate what was to be done with Paul.

There are times, in Scripture, when God’s hand moves silently behind the scenes. Nowhere in the book of Esther, for example, is God’s name even mentioned. And yet, His purposes were served in miraculous ways, nonetheless.

In the same way, I wonder if God was actively at work in these two chapters, seeing to it that Herod’s family would be given every chance to hear the healing words of Jesus’ love, forgiveness, and cleansing power.

Is there a chance God’s silent hand is actively moving on your behalf as well, for He knows you and loves you, and desires you be healed, cleansed, and renewed by His love?