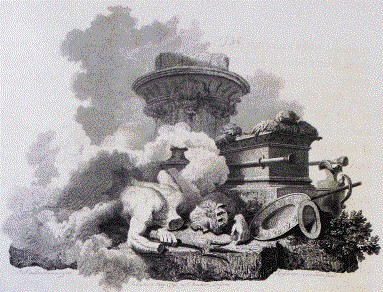 Jonah is associated with the giant fish, a reluctant prophet of hope to the enemies of his people.

at the end of chapter 2, Jonah gets a new lease on life in circumstances that cast him in the light of Dagon.

The very last sentence in chapter 2 succinctly summarizes what would have been—in real life—a hair-raising experience: “Then the Lord spoke to the fish, and it spewed Jonah out upon the dry land.”

Regardless of whether you understand this story as allegory or biography, try to imagine the scene. Good stories draw us in, and our inner eyes provide all the rest.

What part of the coast did Jonah land on? Was it perhaps exactly due east of Nineveh, along some fairly empty stretch, where few people would witness such an astonishing event? Or, more in keeping with the way such a narration would be told, was it back where Jonah started, along the coast of Joppa?

Tarshish, where Jonah had been headed, was about 2,500 miles west of Joppa. Did the fish swim back towards Joppa in the space of the three days Jonah was trapped inside? Nineveh would be a 550 mile trek inland from that spot.

It seems as though as soon as the words were out of God’s mouth the Lord caused this immense fish to spew Jonah out onto the beach. If it were in Joppa, this would have been a bustling harbor, with an extensive wharf, side moorings, vessels of every kind and size, nets and fish, merchants and commerce, travelers and clients, and swarms of seafaring sailors with their captains.

Suddenly a flume of water sprays up out of the ocean, a giant fish bursts forth and out of its mouth comes flying a man, water-logged, bleached from stomach fluids. Seagulls scatter, shrieking, and a crashing wave pushes boats and moorings up as spumes of ocean water pour over the pier, sweeping everything not tied down back out to sea.

He lies on the rocks and sand at the water’s edge for a few moments, as all nearby watch, too stunned to know what to do. Just as people begin to move again, shouting, and making their way towards him, he hunches up to his knees, then staggers to his feet.

He is dripping with fish slime and smelling of seaweed, looking around him in a daze, his clothes tattered and barely clinging to his shivering body. Those nearest him hesitate to approach any further. Who is he? Is he a god?

For prominent among the divinities of ancient Assyria was Dagon, a creature part man and part fish. The centuries-old story still circulated among them of when the Philistines had captured YHWH within the Israelite’s sacred golden Ark of the Covenant and installed the relic within the temple of Dagon at Ashdod. Every morning, the priests would find Dagon’s massive form sprawled prostrate before the Ark.

As many times as they labored to secure Dagon upon his pedestal, they would find him toppled the next day until finally they found their god beheaded, his hands cut off, his legs and feet shattered, and only his torso left before the Almighty Lord GOD of the Hebrews.

To this day, no priest of Dagon ever stepped upon the threshold of Dagon’s temple, for that is where YHWH had left the god’s head and hands.

Now, the people stared slack-jawed at Jonah, at a loss. What would Dagon have them do?

Archaeologists have discovered depictions of Dagon sometimes represented as an upright figure, with the head of a fish above the head of a man, the open mouth of the fish forming a sacred head‑dress, and the feet of the man extending below the tail of the fish.

Images of this fish‑god guarded the entrance to the palace and temple in the mighty city of Nineveh, and they appeared also on Babylonian seals, in a variety of forms.

Berossus, a Babylonian historian, writing in the fourth century B.C., recorded the early traditions about the origin of the worship of this fish‑man. According to the earliest tradition, the very beginning of civilization in Chaldea and Babylonia was under the direction of a person, part man and part fish, who came up out of the sea.

During Jonah’s time, the people of Nineveh believed in a divinity who sent messages to them by a person who rose out of the sea, as part fish and part man.

What better way to be recognized as God’s divinely sent messenger to Nineveh than to be thrown up out of the mouth of a great fish, in the presence of witnesses, on the coast of Phoenicia, where the fish‑god was a favorite object of worship?

And how much time did Jonah have, to collect himself, to find clothes and a caravan? Did he have contacts in Joppa to help him? He would have had to somehow get back to his home, replenish his moneys, re-outfit his traveling gear, for all had been lost when he was cast out to sea. Or did Jonah capitalize on his dramatic re-entry into life? Did he immediately begin to tell his tale, and ask for donations?

As listeners to the story, we picture at least a few months transpiring between chapter 2 and chapter 3, for a re-calibration, a fresh start. God took Jonah exactly there at the beginning of chapter 3.

The word of the Lord came to Jonah a second time, saying, “Get up, go to Nineveh, that great city, and proclaim to it the message that I tell you.”

Now, if you flip back to chapter 1 (as I just did) you will notice something interesting. Here it is,

Now the word of the Lord came to Jonah son of Amittai, saying, “Go at once to Nineveh, that great city, and cry out against it; for their wickedness has come up before me.”

If Jonah had been worried before about the outcome of his preaching and prophesying, he had reason to be even more worried now.

Jonah’s worst fears were beginning to be realized, for he knew that YHWH was a gracious and merciful God, slow to anger, and abounding in steadfast love, and ready to relent from punishing.