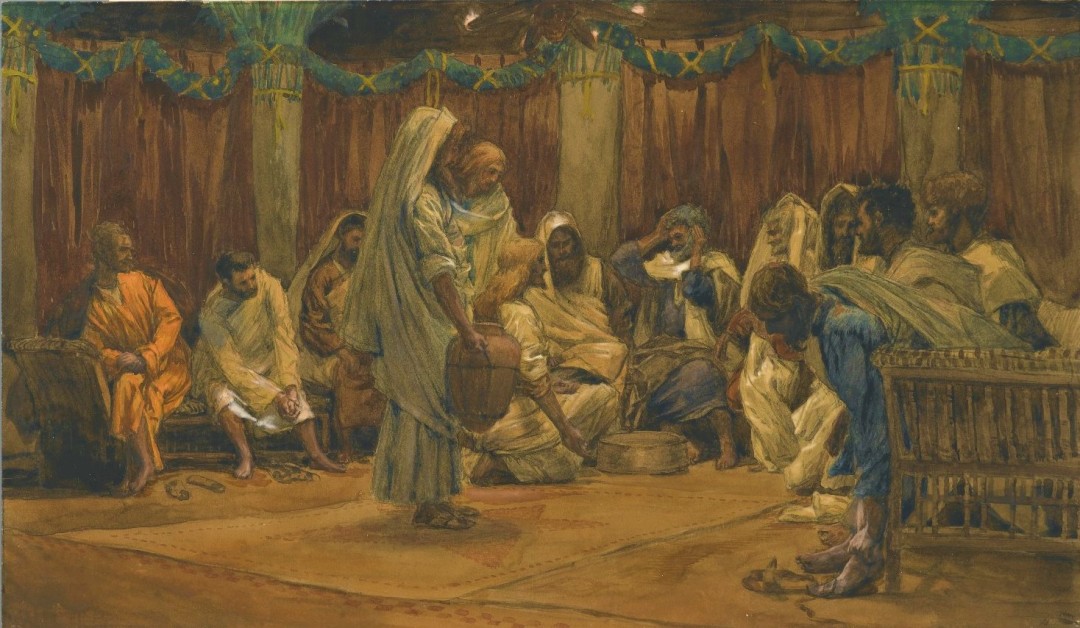 John’s account of this significant occasion is once again unique, autonomous in composition, and a stand-alone on several points.

Of the details that do not dovetail between this account and the Synoptic Gospels’ retelling, two rise above the others in significance.

John, who made a point throughout his gospel, of providing specific dates, days, and times, took care to note this event took place before the festival of Passover. All three other gospels—but really we should say Mark’s Gospel, from which the other two gospels derive their timeline—call this the Passover meal. Here is one article that talks about both sides of the discussion, though it lands squarely on the side of a Passover celebration.

—It is possible John meant the footwashing happened before the Feast of the Passover. After Jesus had finished washing their feet, it would have been time to begin the feast. If night had fallen by this point, then it would be technically the day of Passover.

—Since the Passover Feast lasted seven days, it is also possible they did not want to be rendered unclean in the middle of the festivities.

—He might actually have been referring to preparation for the Sabbath that occurred within the week-long festival of Passover. If the crucifixion happened on a Friday, then the religious authority’s concern that the crucified be taken down before nightfall makes perfect sense. The next day was Saturday, a Sabbath, and a special one, for it was the Passover Sabbath.

Scholars have searched for other significant feasts Jesus might have been alluding to that would include such elements as a covenant and blood, and one (cited in the above article) thought of the feast with God on Mt. Sinai, attended by Moses, Aaron, Nadab, Abihu, and the seventy elders, celebrating the covenant they had just entered into with God. Before that feast, Moses had led the people in a ritual that involved the sprinkling of blood, and burnt offerings.

Then [Moses] took the book of the covenant, and read it in the hearing of the people; and they said, “All that the Lord has spoken we will do, and we will be obedient.”

Moses took the blood and dashed it on the people, and said, “See the blood of the covenant that the Lord has made with you in accordance with all these words.”

Then Moses and Aaron, Nadab, and Abihu, and seventy of the elders of Israel went up, and they saw the God of Israel . . . and they ate and drank.

I find the suggestion intriguing, and can even see an overlap with the Passover.

In its place, and using similar language—compare “do this in remembrance of me” and “do as I have done to you”—John described Jesus washing the feet of each of his disciples.

How to begin a Passover

The way the Passover Seder begins, the head of the table says some prayers, then ceremonially washes his hands.

Everything was going normally as Jesus got up to wash his hands, pouring the water into the basin. But then he started taking his clothes off.

Just sit with that for a moment.

If anything, if they had, for example, been sitting together in this room all afternoon talking and perhaps eating an earlier meal, people coming in an out with dishes. . . If now the table had been swept of crumbs, a white cloth brought out to cover it, candles set, new dishes brought in, the room transformed into the Passover Feast, then Jesus would perhaps have taken off his outer cloak only, as host of the meal, to put on a white robe specially for celebrating the Seder. He might also have put on some sort of head covering.

But he did not.

Instead, even more alarmingly, he wrapped the towel around his waist, as a servant might or an enslaved person.

What must the disciples have been thinking? They had seen Jesus do a lot of strange things, sometimes disturbing, sometimes inexpressibly powerful, sometimes edgy, sometimes incomprehensible. He certainly had their attention.

After pouring water into the basin, as they silently watched, Jesus bent down to wash the feet of each of his disciples. Even today, the visceral sense of exposure, of nakedness makes this reading uncomfortable.

In first-century Palestine, and especially for those of Jewish faith, washing feet was not only an important part of everyday hospitality, it held spiritual and cultural significance as well.

And perhaps this was a part of what Jesus was seeking to teach the disciples. The full extent of love, of agape, is to treat each other as visitors from heaven, for such we are. Each of us is, as the psalmist indicated,

For it was you who formed my inward parts;
you knit me together in my mother’s womb.
I praise you, for I am fearfully and wonderfully made.
Wonderful are your works;
that I know very well.

My frame was not hidden from you,
when I was being made in secret,
intricately woven in the depths of the earth.
Your eyes beheld my unformed substance.
In your book were written
all the days that were formed for me,
when none of them as yet existed.

And the full extent of love is to recognize that wherever the church stands is holy ground, for there is the very Body of Christ, the presence of the Presence, the embodiment of God the Son. Every believer is a holy place, and believers gathered together are holy. We minister to each other through both honoring each other and humbly serving each other.

Remembering the sitting arrangement, a “U” around the table, and the placement of the bowl near the head of the table, then Jesus may have even begun with Judas. (A careful reading of the text implies Jesus had already washed the other disciples’ feet when he finally came to Peter.)

How did he receive Jesus’ love?

In my mind’s eye, I see Jesus bent at his task, lifting one foot and then the other, washing each of Judas’ feet with his hands, massaging away the dirt, rinsing between each toe, then blotting and rubbing each foot with his towel. Judas would have had to look down at his rabbi’s bowed head, hands at work, water sloshing with the dirt of his feet. Somehow, instead of softening his heart, this experience hardened him all the more.

It is a strange phenomenon among humans, to feel a rising bile of contempt against the vulnerability of those we want to be powerful and authoritative. And again, there are some who return tenderness with cruelty, and gentleness with callous derision. I imagine his unaddressed bilking of funds added to his disquiet and disdain.