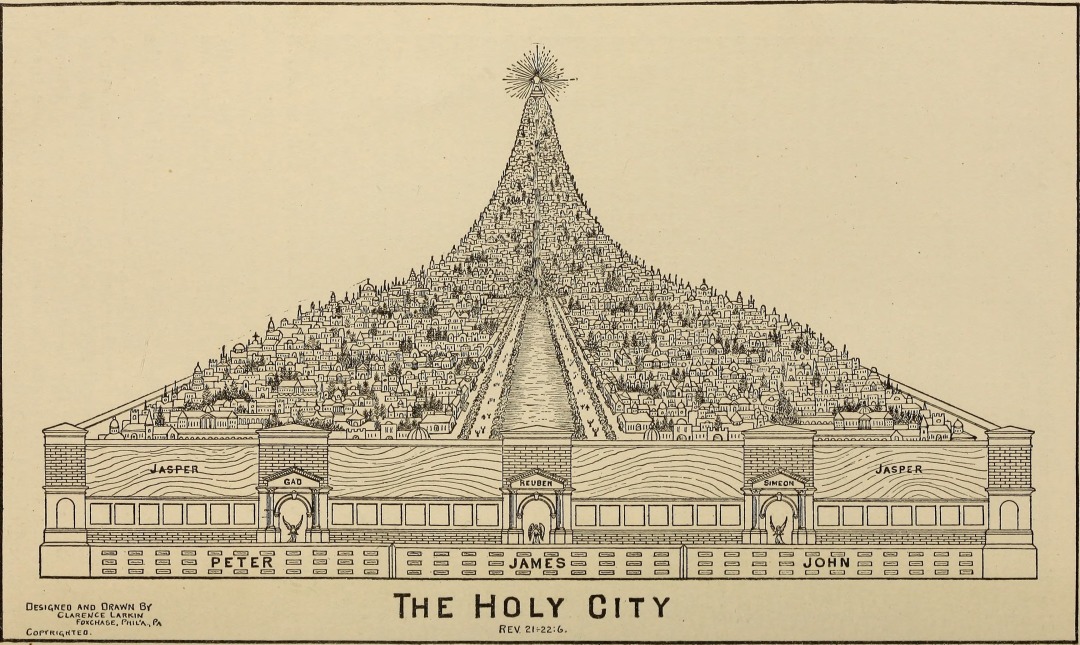 Zechariah is remindful of the donkey, bringing to mind his famous prophecy of the Lord coming in peace, riding on a donkey.

Vision Three: A Man With a Measuring Line

I looked up and saw a man with a measuring line in his hand.

Then I asked, “Where are you going?”

Then the angel who talked with me came forward, and another angel came forward to meet him, and said to him,

“Run, say to that young man: Jerusalem shall be inhabited like villages without walls, because of the multitude of people and animals in it. For I will be a wall of fire all around it, says the Lord, and I will be the glory within it.”

What Does It Mean?

In explaining Zechariah’s first vision to him, the Lord had already spoken of this measuring line.

Now Zechariah saw a man measuring out Jerusalem, yet the more he measured, the bigger Jerusalem seemed to be. In fact it was going to be so big it would have no walls. But wait! Yes, there would be a wall—Almighty God’s glory would surround God’s people with a wall of fire.

Such a prospect, on the face of it, seems magnificent, does it not? To live in complete accord, basking in the warmth and light and security of God’s glory. It is remindful of the state of innocent bliss humanity began with,

They become one flesh. And the man and his wife were both naked, and were not ashamed.

That level of vulnerability and transparency being a good thing, no need for coverings, for guardedness, for alarms and weapons, for protective measures and exit strategies. That level of openness and contentment with whatever might come next, for it will be okay, safe, good, beneficial.

But our reality contains a certain level of discomfort with vulnerability and uncertainty. It may feel exciting to imagine life without walls, but reality is a far different thing. Growth in faith means relying ever more readily on God’s glory within and God’s power without to be all you and I need.

One day that will be our truth.

A Call To Return

Swept up as he was in the Spirit of the Lord, Zechariah exhorted those who were still living abroad “in Babylon” to escape their gilded cage and run to the land God had given them, the land of Zion.

For thus said the Lord of hosts (after his glory sent me) regarding the nations that plundered you: Truly, one who touches you touches the apple of my eye.

See now, I am going to raise my hand against them, and they shall become plunder for their own slaves. Then you will know that the Lord of hosts has sent me.

Sing and rejoice, O daughter Zion! For lo, I will come and dwell in your midst, says the Lord. Many nations shall join themselves to the Lord on that day, and shall be my people; and I will dwell in your midst. And you shall know that the Lord of hosts has sent me to you.

The Lord will inherit Judah as his portion in the holy land, and will again choose Jerusalem.

Be silent, all people, before the Lord; for he has roused himself from his holy dwelling.

The second part of Zechariah’s oracle was about the expansion and prosperity of Jerusalem.

The far-term prophetic fulfillment is found in Jesus’s illustration of the strong man.

“How can Satan cast out Satan?  If a kingdom is divided against itself, that kingdom cannot stand.  And if a house is divided against itself, that house will not be able to stand. And if Satan has risen up against himself and is divided, he cannot stand, but his end has come. But no one can enter a strong man’s house and plunder his property without first tying up the strong man; then indeed the house can be plundered.

Jesus—the man with the measuring line—would bind the powers of spiritual darkness and plunder it, bringing redemption and salvation to all those who put their faith in him, fulfilling the far more ancient prophecy,

The far-term fulfillment of this prophecy is found in the indwelling Holy Spirit to come five hundred years later after Jesus’s resurrection and ascension. Because of God’s presence within every believer, and within the Body of Christ, protection from spiritual darkness is guaranteed.

In you all the families of the earth shall be blessed.”

And the prophecy of Isaiah, echoed by the Apostle Paul

Turn to me and be saved,
all the ends of the earth!
For I am God, and there is no other.
By myself I have sworn,
from my mouth has gone forth in righteousness
a word that shall not return:

“To me every knee shall bow,
every tongue shall swear.”

Only in the Lord, it shall be said of me,
are righteousness and strength;
all who were incensed against him
shall come to him and be ashamed.

For it is written, “As I live, says the Lord, every knee shall bow to me, and every tongue shall give praise to God.”

Therefore God also highly exalted him
and gave him the name
that is above every name,
so that at the name of Jesus
every knee should bend,
in heaven and on earth and under the earth,
and every tongue should confess
that Jesus Christ is Lord,
to the glory of God the Father.

[The Holy City, The Book of Revelation; a study of the last prophetic book of Holy Scripture (1919) | By Internet Archive Book Images – https://www.flickr.com/photos/internetarchivebookimages/14780763261/Source book page: https://archive.org/stream/bookofrevelation00lark_0/bookofrevelation00lark_0#page/n229/mode/1up, No restrictions, https://commons.wikimedia.org/w/index.php?curid=42094108%5D