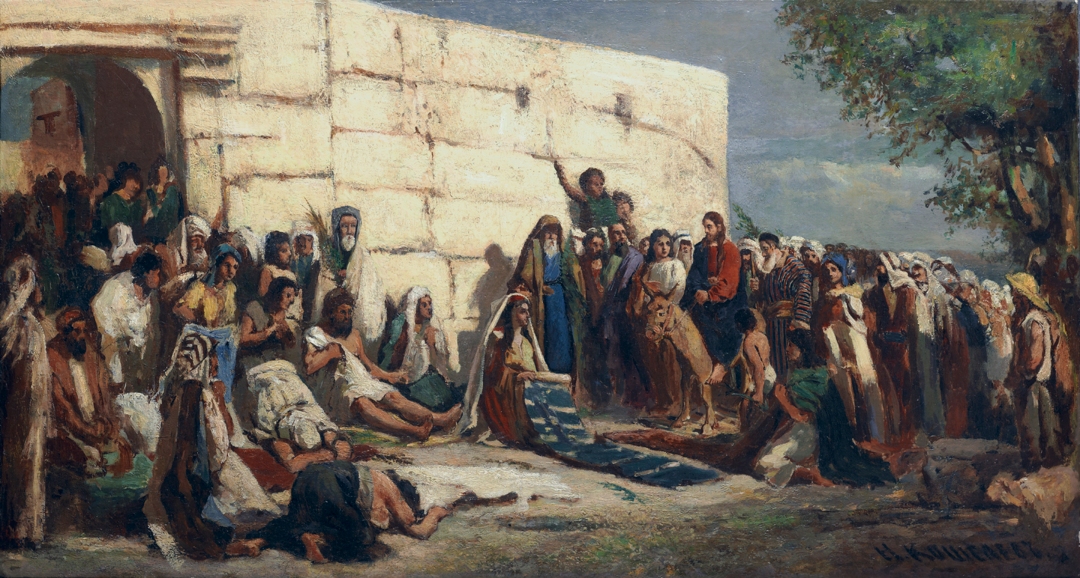 God had burdened Zechariah to talk about three subjects in this prophetic oracle: The Arrival of Messiah, the Reign of Messiah, and the Rejected Messiah. Zechariah began each subject with a “near” future prophecy that foreshadowed a “far” future event.

Rejoice greatly, O daughter Zion!
Shout aloud, O daughter Jerusalem!
Lo, your king comes to you;
triumphant and victorious is he,
humble and riding on a donkey,
on a colt, the foal of a donkey.

The Prophet Zechariah presented a picture of Messiah, Israel’s king, in an oracle that was fulfilled in the triumphal entry of Jesus.

The next day the great crowd that had come to the festival heard that Jesus was coming to Jerusalem. So they took branches of palm trees and went out to meet him, shouting,

“Hosanna!
Blessed is the one who comes in the name of the Lord—
the King of Israel!”

Jesus found a young donkey and sat on it; as it is written:

“Do not be afraid, daughter of Zion.
Look, your king is coming,
sitting on a donkey’s colt!”

His disciples did not understand these things at first; but when Jesus was glorified, then they remembered that these things had been written of him and had been done to him.

An event that would come to be known as Palm Sunday.

When a conquering king rode into town on his horse, it was a sign that he meant to take the city by force, but if he came on a donkey, it symbolized his intention to bring peace.

Jesus was the king of peace.

What Zechariah prophesied was only partially known to him, as the Apostle Peter would later explain

Concerning this salvation, the prophets who prophesied of the grace that was to be yours made careful search and inquiry, inquiring about the person or time that the Spirit of Christ within them indicated when it testified in advance to the sufferings destined for Christ and the subsequent glory.

It was revealed to them that they were serving not themselves but you, in regard to the things that have now been announced to you through those who brought you good news by the Holy Spirit sent from heaven.

What was hinted at in the Hebrew scriptures came to light in the Christian testament: Jesus, Messiah, is the Son of God, one Person in the eternal divine Trinity.

At a specific moment in earth’s history, the Son of God took a human form, becoming the man we know as Jesus Christ, and now remains the unique God‑man forever—fully God and fully human.

Jesus has the true divine nature: before there was anything at all, the Son was with God, a distinct Person within the Godhead, and also was (is) God.

Jesus is the radiance of the glory of God. Not just an image or a reflection of God, He is the exact imprint of God’s nature, He is the image of the invisible God, Jesus is the absolutely authentic representation of God’s being. The totality of God’s powers and attributes rests in Jesus.

Long ago God spoke to our ancestors in many and various ways by the prophets, but in these last days he has spoken to us by a Son,

—whom he appointed heir of all things,

—through whom he also created the worlds.

—He is the reflection of God’s glory and

—the exact imprint of God’s very being, and

—he sustains all things by his powerful word.

God created the world and all things in heaven and on earth, visible and invisible, all power, every authority, all things through Jesus—imagine God’s Spirit hovering over the void and God speaking out. That spoken Word was Jesus.

When the Bible says God upholds the universe by the word of His power, that’s Jesus, Jesus actively holds all things together.

—He is the image of the invisible God, the firstborn of all creation;

—for in him all things in heaven and on earth were created, things visible and invisible, whether thrones or dominions or rulers or powers—all things have been created through him and for him.

—He himself is before all things, and

—in him all things hold together.

—He is the head of the body, the church;

—he is the beginning,

—the firstborn from the dead, so that he might come to have first place in everything.

—For in him all the fullness of God was pleased to dwell, and

—through him God was pleased to reconcile to himself all things, whether on earth or in heaven, by making peace through the blood of his cross.

The Father and the Son are equal in being, yet in the plan of redemption the Son subordinated Himself to the Father – a willing subordination that in no way implies inferiority. Jesus did not consider His equality with the Father something He had to cling to. Instead, He was willing to take on the form of a servant, which meant, as Scripture puts it, to be born in the likeness of a human.

Jesus has a true human nature: that is perfectly united with His divine nature. Jesus’ human nature had the limitations of normal humanity, except He was completely without sin. As a man He humbled Himself by becoming perfectly obedient to the Father, even to the point of death on the cross for the sake of our salvation.

who, though he was in the form of God,
did not regard equality with God
as something to be exploited,
but emptied himself,
taking the form of a slave,
being born in human likeness.
And being found in human form,
he humbled himself
and became obedient to the point of death—
even death on a cross.

Through Jesus, God reconciles to himself all things, whether on earth or in heaven, making peace by the blood of Jesus’ cross. As the writer of Hebrews proclaimed,

When he had made purification for sins, he sat down at the right hand of the Majesty on high.

Which is to say, the work of redemption is complete, and Jesus is actively ruling with God, as Lord over all. Because of Jesus’ humility in obedience, God has exalted him, giving Him authority over every authority.

God also highly exalted him
and gave him the name
that is above every name,
so that at the name of Jesus
every knee should bend,
in heaven and on earth and under the earth,
and every tongue should confess
that Jesus Christ is Lord,
to the glory of God the Father.

Someday every knee will bow and every tongue will confess.

Jesus is the great reconciler. When He came to earth the first time, He was the agent of God’s favor to people, the agent of union between God and people. By rising from the dead, Jesus proved Himself more powerful than even the enemy’s most powerful weapon of mass destruction—death itself. Jesus is the first, but all who put their faith in Him will also be raised from the dead to eternal life.

Having taken on Jesus’ righteousness, you and I can now know peace with God.