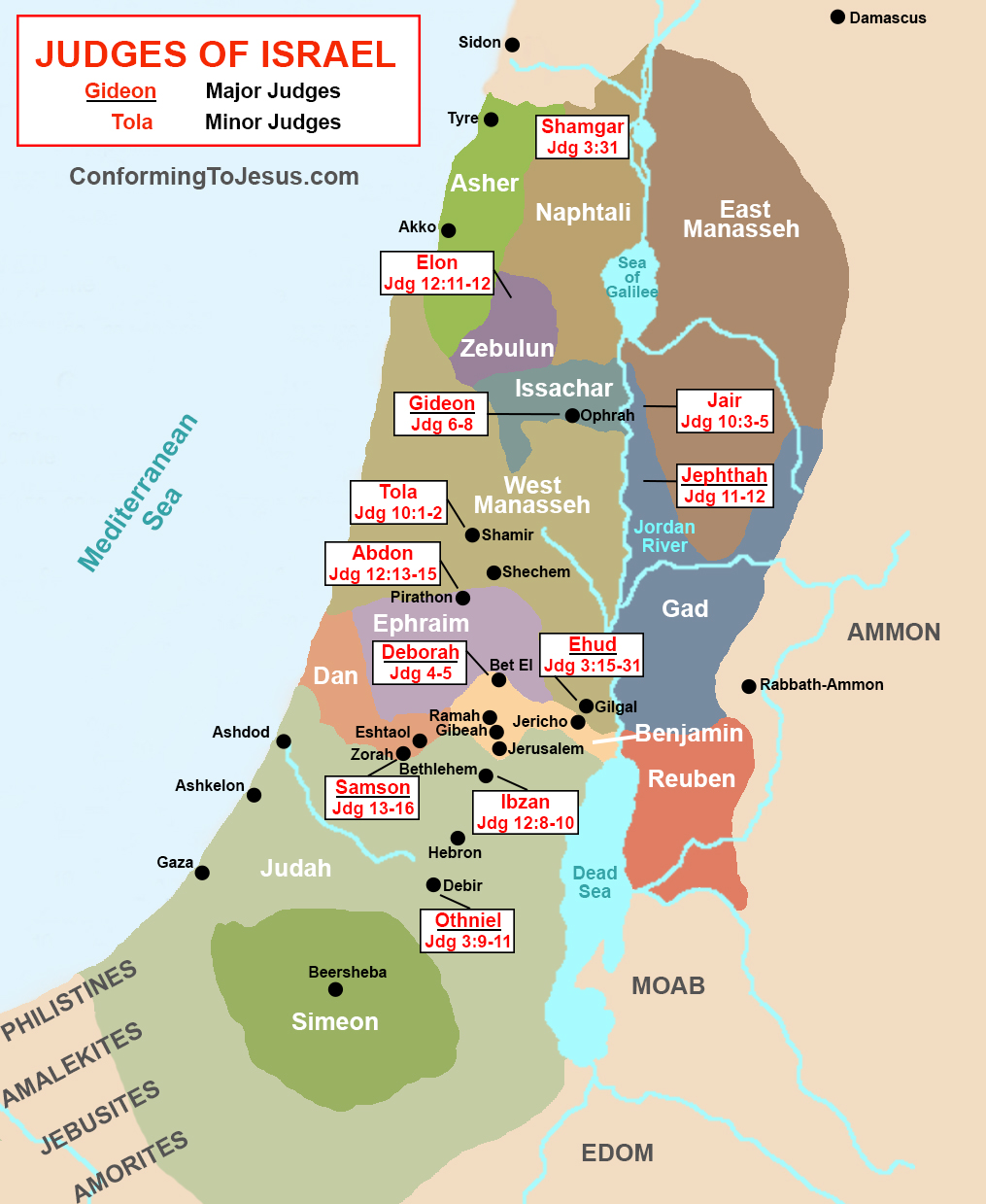 Hebrews: Faith of the Judges

Having made his point with these six pioneers of faith, the writer then recalled to mind other men and women whose mention would have conjured up vivid memories of mighty deeds, great bravery, and fervent faith.

Maybe when you and I think about faith, we think about the kind of victories described here.

And what more should I say?

For time would fail me to tell of Gideon, Barak, Samson, Jephthah . . .

At the very center of the Book of Judges is the account of Gideon, found in chapters six through nine. Something like Moses, Gideon was God’s ideal judge, and his wicked son Abimelech was the antithesis of a faithful judge. Gideon was for God, while his son Abimelech was for Ba’al, the god of the Caananites. Their dichotomy represented the core, the crucial issue for the Hebrew tribes. They belonged to God, but the powerful allure of Ba’al drew them with magnetic seduction.

Gideon’s career began when the Angel of the Lord came personally to Gideon, saying, “The Lord is with you, you mighty warrior,” and called Gideon to Israel’s deliverance.

After much sacrificing and prayer, Gideon found the courage to destroy the altars of Ba’al that had cropped up throughout Israel, then sounded the trumpet to gather the tribes’ armies for battle against the Midianites.

When they blew the three hundred trumpets, the Lord set every [Midianite] man’s sword against his fellow and against all the [Midianite] army; and the army fled as far as Beth-shittah toward Zererah, as far as the border of Abel-meholah, by Tabbath.

And the men of Israel were called out from Naphtali and from Asher and from all Manasseh, and they pursued after the Midianites.

Echoes of Jericho’s thunderous collapse must have reverberated in every Israelite’s ears as they heard the news, for this was how YHWH had brought down that stalwart city, by faith and trumpets.

And it is during Gideon’s tenure that scholars place Ruth’s story.

Barak’s account is not often told, for he was greatly overshadowed by two powerful women—judge and prophet Deborah, and the slayer of Sisera, Jael. Found in the fourth and fifth chapters of Judges, Barak’s story began with God’s call through Deborah to deliver Israel from a consortium of Canaanite kings seeking to subdue the Hebrew tribes.

Politically savvy and militarily respected, the doughty general refused to proceed without God’s prophet by his side, rather than trust in his own abilities.

So Barak went down from Mount Tabor with ten thousand warriors following him. And the Lord threw Sisera and all his chariots and all his army into a panic before Barak; Sisera got down from his chariot and fled away on foot, while Barak pursued the chariots and the army to Harosheth-ha-goiim. All the army of Sisera fell by the sword; no one was left.

God rewarded Barak with resounding military triumph in a surprise twist that no one could have foreseen—and I do not mean Jael’s assassination of the enemy’s commander! It is a fascinating story, and well worth the read.

A lone hero who single-handedly delivered Israel from Hittite oppression, Samson’s story cannot be told without Delilah. Among the annals of Judges, chapters thirteen through sixteen depict this lusty, headstrong, and emotional champion, given as much to impulsive action as to mindful rescue of his people.

It was not until the last hours of his life, chastened through betrayal, defeat, mutilation, and enslavement, that Samson finally found his faith.

Then Samson called to the Lord and said, “Lord God, remember me and strengthen me only this once, O God, so that with this one act of revenge I may pay back the Philistines for my two eyes.”

And Samson grasped the two middle pillars on which the house rested, and he leaned his weight against them, his right hand on the one and his left hand on the other.

Then Samson said, “Let me die with the Philistines.” He strained with all his might; and the house fell on the lords and all the people who were in it. So those he killed at his death were more than those he had killed during his life.

By now, perhaps, you and I are noticing a pattern. With each of these male leaders in the Book of Judges is a woman central to the story.

So it is with Jephthah, who started out in life as a rejected illegitimate son of a prostitute whose only recourse was to find a living as a highwayman. Yet, when the Ammonites made war against Israel, it was to Jephthah the tribal elders turned for deliverance.

In his desire to serve God well, and bring victory only in God’s power, Jephthah swore an oath to offer up to God whatever God so chose in return for God’s supernatural intervention, and God granted that prayer.

And Jephthah made a vow to the Lord, and said, “If you will give the Ammonites into my hand, 31 then whoever comes out of the doors of my house to meet me, when I return victorious from the Ammonites, shall be the Lord’s, to be offered up by me as a burnt offering.”

So Jephthah crossed over to the Ammonites to fight against them; and the Lord gave them into his hand. He inflicted a massive defeat on them from Aroer to the neighborhood of Minnith, twenty towns, and as far as Abel-keramim. So the Ammonites were subdued before the people of Israel.

But Jephthah had not prepared himself for what God would ask of him—his own daughter, the only family he had. If it had taken great faith to make his vow and trust in God to conquer, it took unimaginably more faith to relinquish his only child to the Lord.

Remember, all they had were the Torah, the stories of Joshua’s faith-filled conquests, and God’s mighty presence. They were themselves writing the stories of faith that countless readers down through the millennia have drawn courage from, including you and me. Over the course of about three hundred years, The Lord raised up twelve champions to deliver God’s people from war and slavery.

The overarching theme is the covenant faithfulness of God,

God’s patient, long-suffering love and faithfulness are displayed against the backdrop of a people who not only knew God but had already experienced God’s grace, sung God’s songs, witnessed God’s miracles, heard God’s word, and even promised to belong to God.

But also willfully, repeatedly, as though caught in the grip of some spiritual addiction, regularly returned to worshiping idols and attaching themselves to the morals and practices of the godless living all around them.

The message of faith the writer was driving at must have seemed clear to his readers—Be faithful, for God is faithful. And when you fail, turn back to God, Who is ready to deliver you.