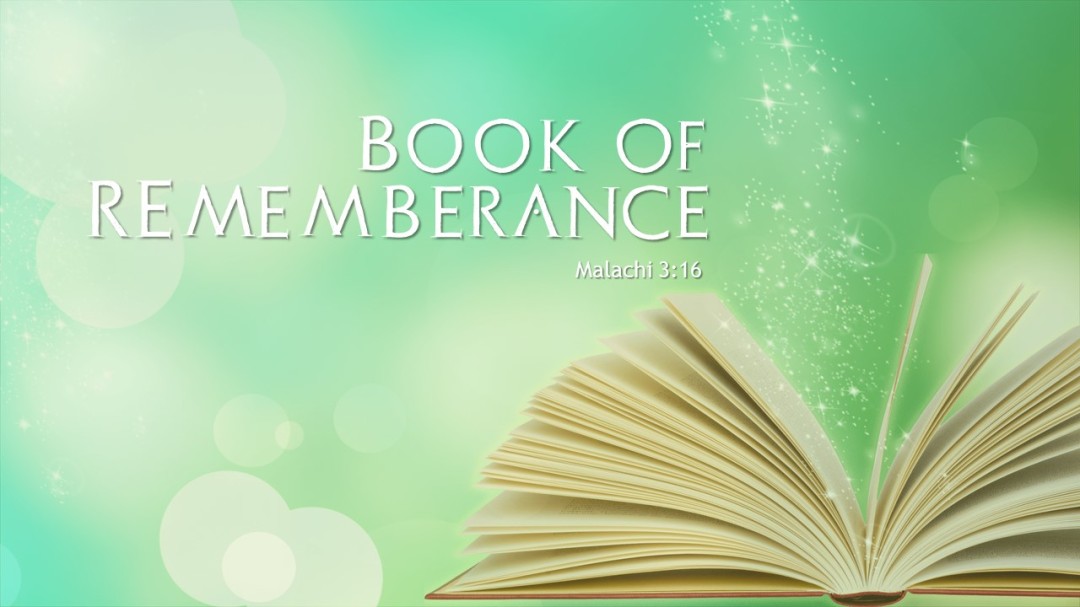 Malachi may be associated with the jackal, which features early in his book, for God had left Edom to jackals, yet now God’s own people were acting like jackals.

Malachi had now delivered five of his six oracles

Oracle 5—Despite Judah’s begrudging worship, God would bless them. (3:7-12)

Oracle 6—God’s righteous judgment and faithfulness would be proven. (3:13-4:3)

As the people thought about the oracles of God delivered to them by Malachi, the one whom God called “My Messenger,” they began to talk with one another.

Then those who revered the Lord spoke with one another.

The Lord took note and listened,

and a book of remembrance was written before [God] of those who revered the Lord and thought on his name.

They shall be mine, says the Lord of hosts, my special possession on the day when I act, and I will spare them as parents spare their children who serve them.

I had to stop with this verse and just sit with it for a while.

God listened, God took note, but even more, God wrote. A book of remembrance was written before God recording the warmth, reverence, and love of God’s people for all eternity.

It brought to mind something the apostle Paul told the believers who lived in the wealthy and urbane metropolis of Corinth.

According to the grace of God given to me, like a skilled master builder I laid a foundation, and someone else is building on it.

Each builder must choose with care how to build on it.

For no one can lay any foundation other than the one that has been laid; that foundation is Jesus Christ. Now if anyone builds on the foundation with gold, silver, precious stones, wood, hay, straw—the work of each builder will become visible, for the Day will disclose it, because it will be revealed with fire, and the fire will test what sort of work each has done.

If what has been built on the foundation survives, the builder will receive a reward.

In a way, those first-century Christians were living with some of the same questions as Malachi’s audience. They had placed their faith in Jesus, but it had brought them each the burden of suffering rather than blessing.

Both Malachi and Paul gave their readers God’s reassurance—God sees, God listens, God notes, God cares. The Book of Remembrance is for eternity, and those who reverence and love God will find their names in that book.

The High Road and the Low Road

Remember that moment when the priest had a choice to take the high road of God’s word instead of the low road of compromise?

When a person could have taken the high road of God’s word to be faithful to their spouse, or the low road of faithlessness and abuse?

When a person had the choice of taking the high road of God’s word by marrying those whose faith is in God, or the low road of compromising faith?

Then once more you shall see the difference between the righteous and the wicked, between one who serves God and one who does not serve him.

The high road is usually the hard road, too, and the low is easier. I think, as the people who revered God spoke to each other they began to experience a resurgence of courage and strength. They could help each other remember God’s statutes.

You and I need the daily ministry of each other’s encouragement.

Years and years ago, I stumbled across an acrostic for the word “encourage.” I wish I could tell you the source, but it is long forgotten.

E – Examine our hearts. Let us be sure we are seeking to encourage and exhort, rather than condemn or tear down.

N – Note our calling. Jesus calls each of us to love God and love each other.

C – Check our attitudes. We have the Holy Spirit! Therefore, we also have access to the mind and heart of God.

O – Own our own faults, frailties, and failings. Every apostle whose letters are preserved in the Christian testament taught in some way on the necessity of humility.

U – Use words wisely. Even the apostle Paul asked others to pray for his ability to speak well.

R – Reflect on Scripture. The more you and I meditate on God’s words, the more we will have those ready for us whenever we need them. This is not about proof texts, this is about understanding the themes, principles, perspectives and commands of Scripture which shape the way you and I are to think about the issues.

A– Always be prepared to listen. Just as God listens to us.

G– Grant time for a response. This is the Holy Spirit’s work. You and I are to model the same patience that God has granted to us. Sanctification is a process of change over time, with lots of loving encouragement.

E – Encourage each other with the affection and kindness of Jesus.

God had given Malachi an apocalyptic promise.

Take courage, Malachi told God’s people, the justice you are longing for is coming, the day of fire is coming, and it is going to completely consume all evil, so that nothing of evil will be left.

See, the day is coming, burning like an oven, when all the arrogant and all evildoers will be stubble; the day that comes shall burn them up, says the Lord of hosts, so that it will leave them neither root nor branch.

But for you who revere my name the sun of righteousness shall rise, with healing in its wings.

You shall go out leaping like calves from the stall.

The same fire and heat of the sun of righteousness, which is God’s word, will bring judgment on evil and restoration to God’s people, already filled with God’s goodness. This is the continuing theme of the refiner’s fire that burns away the dross and leaves gleaming and purified all the good to the praise of God’s glorious grace.

Remember the teaching of my servant Moses, the statutes and ordinances that I commanded him at Horeb for all Israel.

Lo, I will send you the prophet Elijah before the great and terrible day of the Lord comes. He will turn the hearts of parents to their children and the hearts of children to their parents, so that I will not come and strike the land with a curse.

Many have connected Malachi’s parting prophecy—Moses representing the Law, Elijah representing the Prophets—with the inauguration of each next phase of God’s plan of restoration and recreation.

Six days later, Jesus took with him Peter and James and John, and led them up a high mountain apart, by themselves. And he was transfigured before them, and his clothes became dazzling white, such as no one[b] on earth could bleach them. And there appeared to them Elijah with Moses, who were talking with Jesus.

John saw in his vision that in the days preceding Jesus’ Second Coming, there would be two witnesses. Millennial theologians connect Malachi’s apocalyptic prophecy with Jesus’ transfiguration and identify these two witnesses as perhaps Moses and Elijah.

Stay tuned as we begin reading Revelation together!