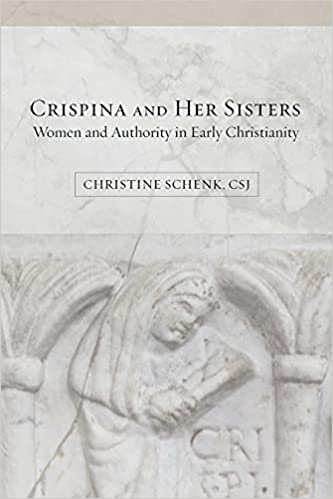 “Crispina and Her Sisters”

I cannot remember how it was that I ended up with this book. It is likely I was looking at the books Amazon suggested would appeal to me, considering the other books I had already purchased. No one else I knew had heard of it. But it looked interesting, I remember that much, and decided to buy it on spec.

I have actually read this book three times now, and I may go ahead and read for a fourth. I first purchased it as a kindle, and didn’t realize quite how long it was until I decided I needed to have the paperback to underline and dog-ear. But honestly, I am glad it is as long as it is, because the research inside is priceless.

Crispina and Her Sisters: Women and Authority in Early Christianity, by Christine Schenk, CSJ, upended just about everything I thought I knew about the early centuries of the church. I cannot tell you how often I have recommended this book to others, for every armchair archaeologist and early church history buff, this book is essential. From funerary inscriptions and stele, to sarcophagi, to ancient city monuments, Schenk has painstakingly pieced together a startling new narrative of just how deeply involved women were in pioneering the gospel, leading, teaching and officiating in the church, and even in ordination.

This book has been foundational in helping me to understand who I am in Christ and in the church, and has shown up in at least half of the papers I have written over the past four years. Crispina and Her Sisters is part of a growing library of books revealing what has so long been hidden. God has always been at work through women as well as men, appointing, anointing, and empowering women to lead in the cause of Christ.

Crispina and Her Sisters have been given their voices back!