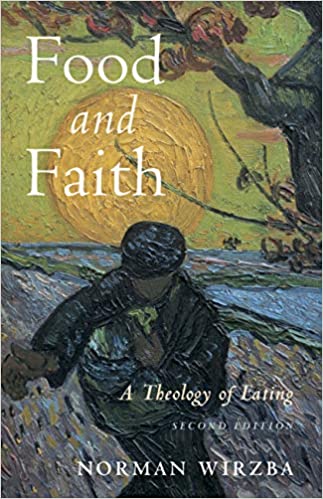 “Food and Faith: A Theology of Eating”

Food and Faith: A Theology of Eating, by Norman Wirzba

From preface to epilogue, this is one of the denser books I have read. The author employed a cyclical, layering style, much like the spiral in a conch shell, to revisit main themes from many angles and depths. I appreciated the effect, in the end, as the author laid the groundwork then built from the loam up concepts he wanted the reader to absorb and retain.

Wirzba’s writing ran to the mystical (the earth loves us, p83, Jesus eating us, Bernard, p212), philosophical (quoting Heidegger and Schmemann, chapter 7 on Grace), and theological (the unusual and winning alignment of Apostle Paul with the gospel of John in chapter 6 on the Eucharist).

Humanity has moved the earth into the Anthropocene epoch, based on two eco-modern fallacies: the earth is a mechanism that will keep doing what it always has done, and humans are nonecological. Humanity succumbed to the temptation of removing all boundaries based on the false belief life is inherent within (p118, 258).

The earth’s ecosystems are in a state of early and accelerating collapse because humankind has become so decoupled from nature, we disregard, dishonor, and even actively brutalize the earth and its resources.

To make food a commodity is to lose gratitude and reverence for the gift of food, allowing mechanization of plants and animals. To convert food into mere fuel is to lose the sense of connectedness to creation. “Fast food” and fast eating damages bodies, disintegrates community, and disconnects people from a sense of place and belonging. Humans expect food to be cheap and easy, divorced from the gardening work that is a part of paradise (p118).

In contrast, God’s call has always been for humankind to garden as God gardened from the beginning (Genesis 2). There were three beautiful examples illustrating this, two of them featured in Chapter 6, entitled, Eucharistic Table Manners: Eating Toward Communion, and the third in the Epilogue, Faithful Eating in an Anthropocene World.

Wirzba writes glowingly of his grandfather’s respect for the animals he husbanded, and his sense of hospitality in all he did, caring for his farm. An example was cutting fresh grass every morning for his chickens, so they would enjoy their food and their stay on his farm. “His daily work was a form of worship because it was a lifting up of God’s gifts so that they might be properly received and cared for.” (p262)

Pigs root through the cow manure for bits of corn, helping to break up the hay and cow patties, which next become fertilizer for the fields.

Gardening is part of the blessing and gift of work God granted to humankind from the beginning, a continuing of the Lord’s own work in caring for the earth God created.

Trinity United, a largely African-American church in the neighborhood of 8,500 members (at the publishing of this book) and located in Chicago’s South Side, lives out our inheritance of redemption and reconciliation by bringing together people and the earth in harmonious relationship.

Their church building houses a farmer’s market supporting mostly African-American farmers, and their building has a green roof. Proceeds from the Farmer’s Market help to fund other ministry projects, including Imani Village (following the link will tell you more about this amazing social enterprise).

Located in southern Japan, Takao Furuno’s rice farm grows without chemical inputs in what Wirzba calls a “monoculture” field. Instead, Furuno has approached each need of his farm with an organic, harmonious response. Soon after he planted his rice, for example, he introduced young ducklings into the water to eat the insects off of the rice shoots. They also fertilized the rice, and Furuno planted fruit along the edges of his rice paddies to also feed the ducklings.

Wirzba writes early about Perichoresis (p49) and carries the theme through, we are interconnected with God and the earth. Death is actually a symbiotic sacrifice, eating the process of receiving the sacrifice of animal and plant life, tending the garden is the action of self-sacrifice. This concept is embodied in animal sacrifice, Christ’s sacrifice, fasting and feasting.

There are some aspects of this book which have left me wishing for more.

Wirzba silverfishes away from discussing the “death” aspect of eating in heaven, though hints perhaps there will be consumption without it (p291). Because death is such a central theme to his premise, that needs more time.

The need for economic equity is stated early Food and Faith and Wirzba writes admiringly about Slow Food (p243), but leaves the bridge between poverty and sustainable eating unbuilt. He also does not address the impossibility of bringing the earth back to the terrarium he admires in his examples (listed above) with nearly eight billion humans and counting.

As with many philosophical books, even this one with so many good examples of people purposefully living redemptively in relationship with the planet, I would have liked a chapter, however small, on practical ways ordinary people can move towards more harmonious living. Certainly “reduce, reuse, recycle” is available to us, and perhaps for some gardening is a possibility. But are there other concrete, livable ways in which we can take this excellent book seriously?