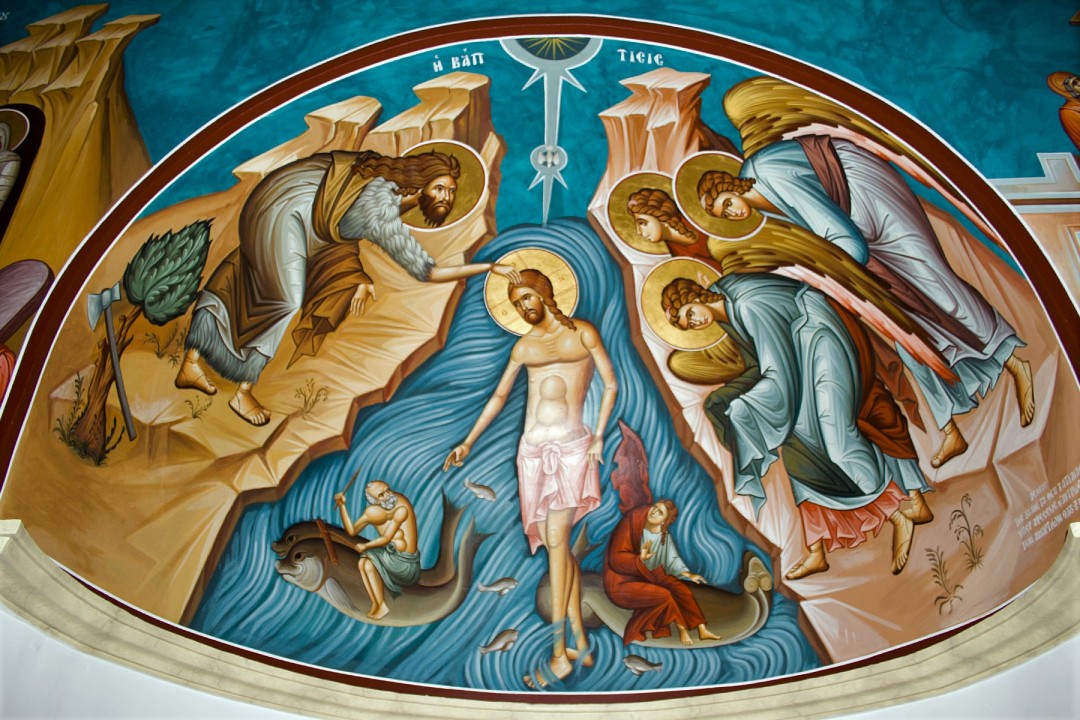 What really gets your goat?

So much so, you’re apt to stand up and say something about it? Is it politics? Ethics? Religion? Is it the environment, or sex and gender issues, or taxes? Have you ever noticed what happens when people get really heated up on a subject?

Acts chapter 15 is about a real crisis of dissension. In the first dispute, It looked as though the church was going to be split into two camps – Jewish and Gentile. Eventually, the Jerusalem council, which was comprised largely of Jesus’ original disciples led by His brother James, was able to hammer out a clear doctrine on the teaching of salvation, and a compromise that could build a bridge between these two growing communities, Jerusalem and Antioch.

But, the core dissension had to do with a very deep divide between Jewish and non-Jewish believers: the issue of circumcision, which was itself symbolic of the whole of God’s law as given to Moses. This dissension on millennia-old doctrine would continue to divide believers up until the last pages of Luke’s account.

The second dispute cropped up between Paul and Barnabas, and I am inclined to pose it as a people versus task issue. Barnabas saw potential in Mark, Paul saw the weakest link in a chain he needed to be strong. Barnabas, ever the mentor, coach, and shepherd, was more interested in building up Mark. Paul, the evangelist with a burning zeal for God, was more focused on successfully fulfilling the divine mission entrusted to him.

We face the same tension today: how do we prioritize in ministry? Success of the project, or shepherding the people?

(Because this deserves a lot of time, combining Acts 15 and Galatians 2, I’ll break it up over several days this week and include illustrations, story, and dialogue.)

Let’s look at the growing picture of Paul’s Antioch and James’ Jerusalem. In Paul’s Antioch, there was a growing number of Gentile believers. Paul did not lay the Judaic law on them, but rather taught them principles of truth about character and spiritual attributes.

In James’ Jerusalem, the believers were almost exclusively Jewish, and devoted to God’s word, which is to say the Law and the temple and its practices. In fact, remember back in Acts 6:7 “a great many priests,” it says, “became obedient to the faith.” Many were also members of the Pharisee sect, becoming Christians.

Indeed, up until this time every man who wanted to be counted as belonging to God invariably, even among the most nominal of Jews, was circumcised, including Jesus Himself.

Yet, after Paul and Barnabas’ missionary journey, uncircumcised Gentiles were literally flooding into the church, and Paul -seemed- not to be requiring even the most basic nod to the Law, beginning with circumcision. They were coming out of lifestyles where sexual immorality was the norm and though converted, they were not transformed overnight. There were many polluted practices associated with idol worship. When they entered the church, they did not at first understand God’s holiness, and His demand for purity and holiness in His people. They’d had little to no exposure to God’s word, or God’s teaching.

To most Jewish believers, this looked like a recipe for disaster, and the purity of God’s people was at stake.

Somewhere in the middle, and recent in memory, was Peter’s experience at Cornelius’ house, where a whole houseful of god-fearing gentiles had received the Holy Spirit after Peter had his vision from God about not calling unclean what God had called clean.

Somewhere in the middle was Barnabas as well, who was a good Jew, a Levite, a mentor to Paul but also to others, and a recognized leader among the apostles, especially to Peter. He was like a connection between the Jerusalem and Antioch churches.

Their doctrines were growing in conflict.

The Jewish believers had not yet fully grasped the Holy Spirit Himself had already circumcised the hearts every believer.

The Jews had also become more and more uncomfortable associating with the uncircumcised. The spiritual organism of Christ’s body was coming apart because of their repulsion. The Judaizers could not accept that baptism of the Holy Spirit was enough to be identified with Christ.

Even the eating the Lord’s supper together was at risk. At that time, it was a full meal enjoyed together, called love feasts. But the non-Jewish dietary habits were grossly unkosher, making it impossible for the Jews to feel comfortable eating together with non-Jews. That meant even the Lord’s supper could not be enjoyed together. Instead of being one in the Lord, the rift was deepening into two separate camps: the circumcised, and the uncircumcised.

So, now let’s take a deep dive and see what was happening at the ground level. (combining Galatians 2 with Acts 15)

When he’d gone down to Samaria, he’d been overjoyed by the great work of Jesus there, and had laid hands on many Samaritans that they might receive the Holy Spirit. He had gone to Cornelius’ house and been overwhelmed by the mighty work of Jesus among those uncircumcised Roman god-fearers. So, he was the obvious candidate to go to Antioch to review the work of Barnabas and Paul, as they built up the church in Antioch.

At first, he had experienced the same wonder and the same joy, as he joined the very diverse gathering of believers in Antioch—Jews, non-Jews, Africans, slaves and freedmen, citizens of Rome, even, wealthy and impoverished, women and men, it was a beautiful portrayal of Jesus’ words to them on the Mount of Ascension. This was the gospel, spread to every corner of the earth.

But, then came some from the Pharisee group, those among the priests and scribes who had put their faith in Jesus. They had been deeply troubled by the increasing reports coming into Jerusalem: Paul was not only -not- requiring the feast days and other observances of the Law, he was even preaching against circumcision as the mark of inclusion with God’s people.

They arrived in high dudgeon, and they came with a damning message:

Paul is not a real apostle.

Nobody in Jerusalem ordained him.

He doesn’t have the support of the home churches.

He is not faithful to the Law God gave to Moses, and to the oral Law brought by angels.

If he were any real Jew, he would have given you these foundational truths taught by our rabbinical tradition.

He came to you with no authority at all, and taught you half-truths because he either doesn’t know, or doesn’t respect, the whole truth.

We, however, come by the authority of the Jerusalem leaders, we have the support of the home churches, we are faithful to the Law, and to the teachings, and we are concerned for you, that you do not have God’s favor nor peace with Him, because you do not keep His Law.

Their righteous zeal for God and His word affected even Peter, and then even Barnabas himself, as they drew back from eating with the rest of the Antioch church during the Love Feasts and the Lord’s Supper.

Paul was infuriated, left holding the bag, made to look like a renegade, off the rails, starting some sort of fanatical sect.

When he couldn’t stand what he was seeing anymore, he publicly denounced Peter himself.

“Peter!” he had roared. “You hypocrite!”

“How can you do this?

“You know this is utterly and completely wrong!

“You, of all people. Did you learn nothing at all from Jesus when He told you not to treat as unclean what He has called clean? Have you so soon forgotten the outpouring of God’s Holy Spirit onto the gathering at the Centurion’s house? This is how you’re going to treat the beloved sisters and brothers of the LORD’S house? YOU?!”

Koinonia, intimate fellowship which accepts each other as beloved family, accepts each other in a special way that means deep connection. In this case, the connection was Jesus’ Spirit Who filled them all, guided them, empowered them, and called them to their life work. Jesus had shown His clear approval and pleasure in both churches, and was well-pleased with their progress. They weren’t getting everything perfectly, but they were doing well, they were growing, and that’s what counts.

Peace at any price is conformity, not unity; it’s making the outside look the same. Unity is when hearts, minds and souls agree. When it means having to make a choice between sacrificing harmony and sacrificing the truth, then truth must prevail. Paul, confident in the revelation he had received from Jesus Himself and no other person, insisted that salvation and inclusion with the people of God by faith alone was true, it is a divine work of God marked by new birth.

Baptism, now, was the outward symbolic sign of inclusion, marking the very real seal of the Holy Spirit within. Circumcision, by the way, was a mark only half of the Jews could bear, as no woman could receive the mark of circumcision (as described in scripture). Water baptism, however, not only vividly illustrated the washing away of sin, descending into the death of the old life, and rising up into new life as one of God’s family, it was a symbol and rite every believer could equally participate in.

We, today, are in the same place. There are people who have very different doctrines even within our own churches, people we can’t agree with, but we see God is at work in them, as well as us.

The rift that existed between the Antioch church and the Jerusalem church was already causing such sharp dissension all the leaders of all Christendom had to talk it out and come up with some kind of way through the mess so they could have koinonia together. And, it didn’t last, not really. We know, from Acts and Paul’s letters, including Galatians, the dissension just got sharper.

We face the same kind of dilemma today. These divisions are pretty sharp. It’s hard to know how to keep integrity and still live in koinonia with our brothers and sisters in the Lord whom we sharply disagree with.

The best we can do is to keep Jesus’ words front and center. The core of our faith is to love God and love each other, as the leaders established in this passage of Acts, koinonia. And, in a broader sense, love God and love all others, trusting God will show you what that looks like when the time comes.