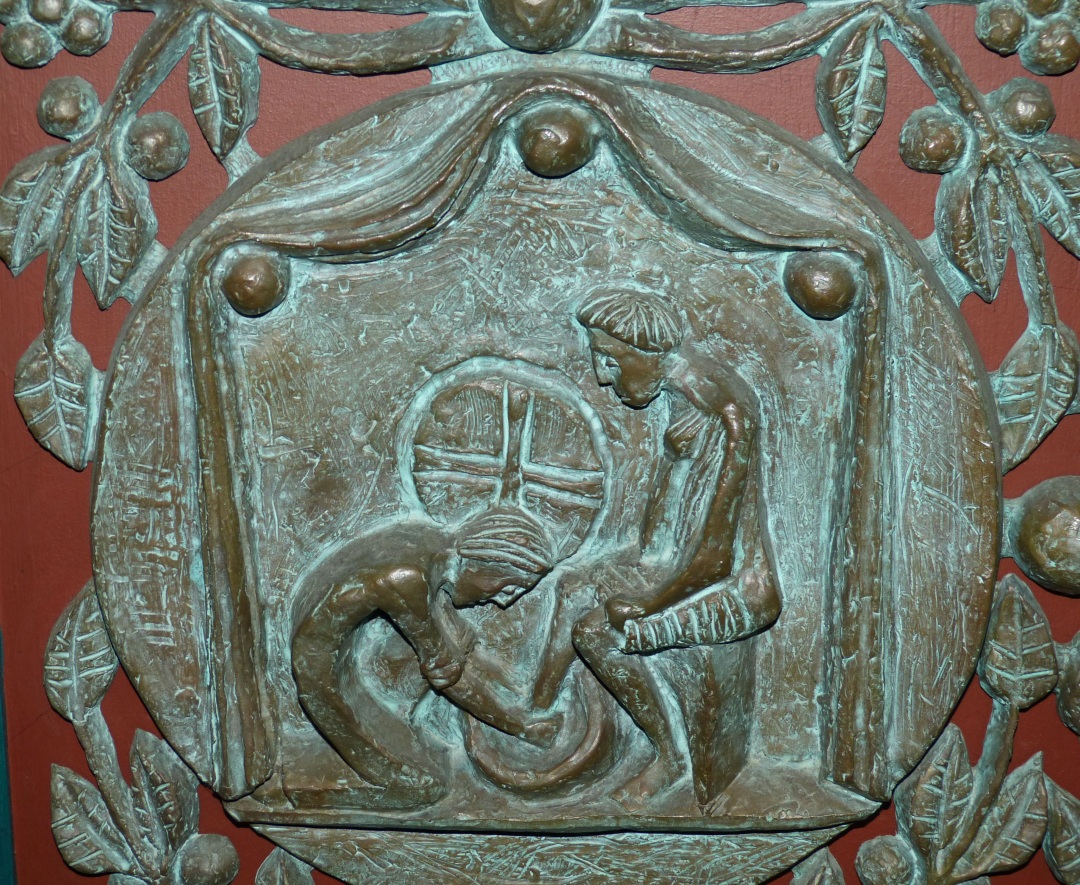 Gospel of John: Mutuality and Equality

The example Jesus had given his disciples would be very difficult for them to understand. There was really nothing in their world that could help them. Everything about first century, Graeco-Roman life had to do with status and power, agency and authority. To relinquish those things seemed madness, and yet that is exactly what Jesus had just done, before their very eyes.

Little did they know, this was just the beginning of Jesus’ “descent.” Soon would come betrayal, condemnation, treachery, torture, mocking, and the most painful and ignominious death the Roman Empire could muster.

Had they even put their sandals back on, as Jesus spoke to them? Did Jesus stand there, his now wet towel still tied around his waist and he still holding the basin filled with dirty water? What would such a rabbi look like in their eyes? Did they feel shame for Jesus, humiliated for his sake? It is no wonder to me this story only shows up in John.

Perhaps, in the end, it was just too unnerving, too exposing, too vulnerable a scene for the others to retell. It says an awful lot about John that he chose this to highlight, rather than the Eucharist—which does not show up anywhere in his account of this final meal.

A Bondservant is not Greater than the Lord

I imagine them all in various stages of swallowing hard, examining their finger nails, shifting uncomfortably in their seats. Jesus was thoroughly cancelling their dreams of grandeur, of striding like princes beside their king.

If the master becomes a bondservant, where does that put the bondservants!?

On the same level as the master. There really is nowhere else to go. Bondservant is at the absolute bang bottom of the barrel. By the same token, if their master is a bondservant, and they in turn are bound to their master . . . they cannot be any higher in status.

By becoming a servant, the Lord did not bring his disciples down, he lifted his followers up by bringing all the dignity and beauty of his lordship to sacrifice and service.

This is who our Lord is.

Please let that sink in.

Keep letting it sink. In.

Every church where the pastor runs the show, where the pastor decides what the vision is going to be, or even where there is an oligarchy of elders, a council of leaders, who decide what is happening next, then tell the rest of the church the vision they will now be expected to embrace, will tell the rest of the church what they are now expected to support, pay for, submit to, obey . . .

have made themselves to be greater than their Master.

I can hear a whole chorus of outraged, “But, but, but” spluttering away.

What About Servant Leaders?

Well, what about them?

What does that mean?

If it means a very nice pastor, who is kind to everyone, who is quick to open the door for others, and works long hours without ever asking for thanks, still runs the show, then the “servant” part is a misnomer.

The kind of leader—if we even have to call it that—Jesus was demonstrating is one who cares for, instructs, builds up, and develops those in their care. Everyone in their circle is given agency and is treated as an equal. This kind of leader is accessible, vulnerable, teachable, flexible, and faithful.

This kind of leader listens first, asks questions next, and rarely tells others what to do, or think, or be. This kind of leader relies upon God to guide, and trusts the right decision will be arrived at in patient prayer, as each person catches the vision from God.

I am going to take a sidebar to Luke’s account of how the early church organized itself.

There is something in us that just loves a hero, someone who will, with brazen confidence and absolute authority, point the way and charge, while all of us run gladly in that direction. We just love it!

But in John’s gospel that is exactly what Jesus refused to do, time and again. Revisit chapter 6, and see what I mean. Why? When he is the King of kings, and Lord of lords? Well, first, it was not the hour for that. That time will come, but it is not now.

More importantly, Jesus was teaching his disciples about sacrifice and service, not about glory and power.

We are the body, and all of us, if we are to operate well as the body, will move cooperatively with each other by the prompting of the One Head.

This all might have sounded like misery to Jesus’ disciples that night. Jesus surely sensed how disquieting his instruction was for them.

If you all perceive and know these things, you are happy and blessed when you do them.

So Jesus showed a progression to true joy: Humility, holiness, then happiness.

The kind of humble service Jesus showed here comes from what the Bible describes as a submissive spirit. There is no self-absorption here, but rather someone who can both give freely and receive freely, someone who can equally enjoy washing someone’s feet, or having their own feet washed, because there is no concern about status, power, or turf, no sense of superiority.

This is a hard one, is it not? It is hard for me, anyway. I have to work hard to ask good questions rather than tell people what to think and do, to step out of the Holy Spirit’s way, to not wring my hands when things go differently than I would care for.

Sadly, very, very sadly, the church did not hang onto this crucial teaching from the Lord. Not even a hundred years later, apparently overwhelmed by the fear all Christendom would be corrupted by false teachers, Ignatius of Antioch leaned heavily on the churches to do nothing without their bishop present.

This was to become known as one-bishop rule.

No argument would be brooked, and no bishop could be challenged.

It would cause great upheaval and sorrow for Christians who did not believe in this hierarchical, authoritarian approach.

[Jesus washing the disciples’ feet | Image by falco from Pixabay]