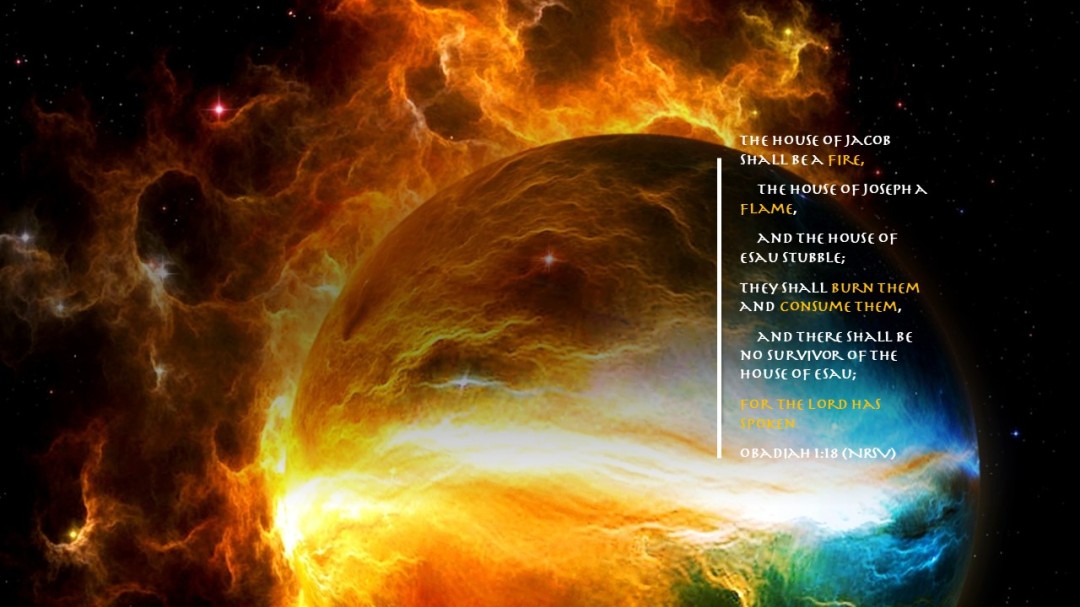 Obadiah perhaps can be best remembered as the eagle with which he opened his book. Though lofty in its flight, God would bring the soaring eagle of Edom down.

Whereas last week was God’s word of condemnation and judgment against Edom concerning their pride, and their violence against Israel, this week is about God’s ultimate restoration of Israel to the Promised Land as well as to right relationship with the Lord.

Day of the Lord

The deliverance of Israel seems to be all wrapped up in what is often referred to as That Great and Glorious Day, The Great and Terrible Day, The Day of Judgment, The Last Judgment, and similar titles, all pointing to: The Day of the Lord.

Judah had repeatedly broken their covenant with God, and after the good king Josiah, had plummeted into the very dregs of wickedness, flatly refusing to acknowledge, let alone listen to God. There was no hint of adherence to the Law, and in fact, the people had managed to transgress every one of God’s commands.

But the Assyrians, and later the Babylonians, did not see themselves as God’s rod of correction. They were intent on destruction, they were on a power high, glutted with a sense of their own mightiness, greater than any gods Judah could come up with.

By the same token, Edom joined in with Babylon at the destruction of Jerusalem, literally reveling in the carnage, the ransacking of Jerusalem, and the ruin of God’s temple.

So God would level God’s judgement against these nations, in due time.

The reason behind the Day of the Lord having such varying titles has to do with the audience. Who is to be judged? And how will the judgment be expressed?

The Lord’s judgment of God’s own people is to be corrective. God evaluates the quality of those lives of faith and, as the Lord had promised to do, applies increasingly heavy corrective measures when God’s people stray. The Lord’s intention is always to restore and build up God’s people. God’s fire to God’s people is light, and God’s aim is to make God’s people holy.

The Edomites were not God’s people. They had set themselves above God and were intent on not only destroying God’s people but proving their own gods as greater than Almighty God. They thought they had good reason, in their impregnable city made of living rock, with their wealth, wisdom, and powerful alliances.

Although the Bible talks about many kinds of judgments—the book of Revelation alone is full of them—throughout the scriptures, God’s final judgement is found in two main categories: Punishment or Evaluation.

Sin, according to the Bible, wading through the long lists of what most of us would recognize as wrong in some way, can be distilled into this one essential: absence of faith in God.

Punishment of sin seems to be reserved for those who were given the opportunity to receive the Lord, and rejected God instead, who chose other gods, or rejected all gods but themselves. Jesus spoke extensively on this in his apocalyptic discourse found in Matthew 25. Jesus depicts a time when all will stand before God to give an account of their lives on earth.

Those who have rejected God will find no rewards in this judgement. There will be no scales, with good deeds weighing on one side and evil deeds on the other. There will be only one question the Lord Jesus will ask: Do I know you?

God is just. So God’s judgments are just, God gives what is deserved. This is the truth you and I rest on in matters as weighty and troubling as these. Sin’s punishment was, and will be, no greater than sin itself, and not one person innocent of sin will be judged against.

(2) God’s Evaluation of the Works of the Faithful

This also seems to be a sorting into two piles, but the criterion is different than that of sin. This judgment has to do with how well the faithful have served the Lord Jesus Christ as his disciples in this life. In this judgment there are only rewards.

The signature passage addressing this second kind of judgment is found in one of Paul’s letters:

For no one can lay any foundation other than the one that has been laid; that foundation is Jesus Christ.

Now if anyone builds on the foundation with gold, silver, precious stones, wood, hay, straw—the work of each builder will become visible, for the Day will disclose it, because it will be revealed with fire, and the fire will test what sort of work each has done.

If what has been built on the foundation survives, the builder will receive a reward.

The Lord’s evaluative judgments are sometimes spoken of as rewards.

It is in this judgment that words and deeds will be weighed, though again, the scale will hold an unexpected weight. It is not whether the word or deed itself is of merit. The weight will be carried in the matters of the heart—motivation, presence of the fruit of the Spirit, and abiding in Jesus.

Such heart matters will be transformed into treasure to be rejoiced over.

Whatever was said and done without godly motive, without the presence and empowerment of the Holy Spirit, will simply be burned up, and you and I will be glad to see it go. Why would we want such baggage for all eternity?

God’s final judgment is described as permanent and universal. The old heavens and old earth will be completely destroyed by God’s coming judgment of fire, and only those obedient to the Lord Jesus will enter into the new heavens and earth.

God’s judgment shows that who we are and, by the overflow of our hearts, what we do matters.

Obadiah’s sense of the nearness of God’s Day of Judgment, and urgency to be ready for God, was a much-needed infusion of hope for the dejected exiles. However, many have asked whether we should read these prophecies as literally as Obadiah’s prophecies concerning Edom. Those predictions, as given first by God, were all fulfilled over two thousand years ago.

Can it be that these eschatological prophecies, millennia old and yet-to-be-fulfilled, can still be seen as promises that will physically take place at some future time?

Well, whether we agree on the literal, concrete realization of Obadiah’s predicted apocalypse, you and I can still understand them as spiritual prophecies.

A Fire and a Flame

But on Mount Zion there shall be those that escape,
and it shall be holy;
and the house of Jacob shall take possession of those who dispossessed them.

God will bring deliverance, not just Israel’s future deliverance from physical enemies, but spiritual deliverance to all who believe in God, from the power of sin, from Satan and sin’s penalty, death.

In the same verse, God will make Zion holy, and the Lord will make God’s spiritual dwelling, every believer, also holy.

Those who have been saved shall go up to Mount Zion

and the kingdom shall be the Lord’s.

Let it be that when you and I fly like eagles today, it is from faith to faith with God.