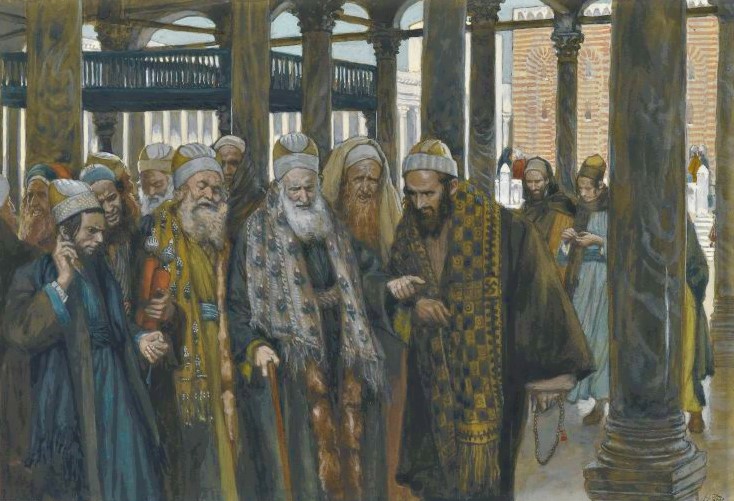 Malachi may be associated with the jackal, which features early in his book, for God had left Edom to jackals, yet now His own people were acting like jackals.

After delivering God’s indictment, Malachi the messenger now delivered from God’s lips to the priests’ ears the Lord’s judgement.

Entitlement, according to the dictionary, means, the fact of having a right to something, and more pointedly, the belief that one is inherently deserving of privileges or special treatment.

The priests Malachi was speaking to considered themselves entitled by virtue of their heritage. And, to a certain extent, they had been given reason to believe this. The priests and Levites had played a key role in bringing the exiles back to Jerusalem, in the work of rebuilding the city’s walls and temple, and in the continuing effort to educate the people in God’s laws, wisdom, and commandments.

Their story of origin was both powerful and praiseworthy.

When Moses had returned from forty days and nights with the Lord, holding the stone tablets containing God’s commandments, he saw that the people were running wild, out of control, in an orgiastic bacchanal around the golden idol of a calf. Moses thundered to them to repent! To reaffirm their commitment to the Lord.

Moses stood in the gate of the camp, and said, “Who is on the Lord’s side? Come to me!”

It was an open invitation to everyone, but only the Levites responded.

Way, way back in Genesis, four hundred years before, two of Jacob’s sons, Simeon and Levi took their swords and killed every male in the city of Shechem because the prince had sexually assaulted their sister before they were married. They then plundered the city, took all the flocks and herds, all Shechem’s children and women, all their wealth, and kept it all for themselves. When confronted, both of them told the same story: they had done it to defend their sister’s honor.

But were they telling the truth?

Years later, when Jacob prophesied over his sons, God’s word to both Simeon and Levi was that their descendants would never have an inheritance in the promised land for the terrible thing they had done.

Now, centuries later, the true nature of the Levites’ fierceness to defend the honor of one they loved would be used for the Lord. And it is that same fierceness and ability to deal with slaughter and blood that positioned them to receive God’s calling to be priests, to offer up all those sacrifices daily to God.

Now, another thousand years had passed, and God’s Covenant with Levi was still in effect. Both Ezra and Nehemiah had reinstated the Levitical laws and practices even as the rubble from the ruined temple was cleared away, and all that was left was a courtyard and an altar.

The priests continued to offer up sacrifices and the incense of the people’s prayers to God as the new temple was built up around them.

And the tribe of Levi, who had led the way in coming back to Mount Zion, had once again taken charge in

But, they had grown weary in faithfulness, feeling unrewarded for their work. Their sense of entitlement undermined their reverence for God, their own humility before God, and their sense of responsibility as Israel’s spiritual leaders.

And now, O priests, this command is for you.

—If you will not listen,

—if you will not lay it to heart to give glory to my name,

says the Lord of hosts,

—send the curse on you

—and I will curse your blessings; indeed I have already cursed them, because you do not lay it to heart.

—I will rebuke your offspring,

—and spread dung on your faces, the dung of your offerings,

and I will put you out of my presence.

There can be no mistaking the public nature of God’s indictment and discipline. The final piece was being removed from office.

God—Who is the same today, yesterday, and forever—admonished the assemblies in the first-century church they would receive the same discipline if they did not repent from the specific wrongs God listed. Jesus cautioned,

Remember then from what you have fallen; repent, and do the works you did at first.

If not, I will come to you and remove your lampstand from its place, unless you repent.

It is not a loss of salvation, but rather a loss of position.

Even a cursory glance of news’ headlines in the past ten years reveals God continues to be actively at work taking to task spiritual leaders whose sense of entitlement undermines their reverence for God, personal humility, and sense of responsibility.

James, Jesus’ brother, who led the assemblies in Jerusalem, warned those who found themselves in teaching positions, saying,

Not many of you should become teachers, my brothers and sisters, for you know that we who teach will be judged with greater strictness.

And so, these priests, who by their laxity, irreverence, and pollution of God’s altar and table, negated everything they taught to the people from the scriptures, were removed from God’s presence—which is to say, removed from their offices and replaced by others.

God was not annulling the Lord’s sacred vow or abolishing the everlasting covenant God had made with the tribe of Levi.

Know, then, that I have sent this command to you, that my covenant with Levi may hold, says the Lord of hosts.

My covenant with him was a covenant of life and well-being, which I gave him; this called for reverence, and he revered me and stood in awe of my name.

True instruction was in his mouth, and no wrong was found on his lips.

He walked with me in integrity and uprightness, and he turned many from iniquity.

For the lips of a priest should guard knowledge, and people should seek instruction from his mouth, for he is the messenger of the Lord of hosts.

But –you- have turned aside from the way;

-you- have caused many to stumble by your instruction;

-you- have corrupted the covenant of Levi,

says the Lord of hosts,

and so I make -you- despised and abased before all the people, inasmuch as -you- have not kept my ways but have shown partiality in your instruction.

It is surely at this point that Nehemiah returned and instituted his religious reforms:

He cleared out the state room that had been converted from the temple’s vast storehouse for one of the priest’s relatives. This was a completely offensive and unauthorized use of the temple grounds!

Nehemiah had to have the room ceremonially cleansed and purified for the work of God, and then restored all the tithes and offerings that had been removed.

What’s more, many of the temple workers—all Levites—had had their wages either garnished or held back entirely, another offensive and highly irregular crime. Worship had ground to a halt, because the temple singers had all had to go back to work in the fields just make a living.

Nehemiah had to travel cross-country to gather all the worship leaders and other Levites and reinstate them, as well as furnish them with back-pay.

This time, rather than trust the priests, Nehemiah appointed independent accountants.

Desecration of the Sabbath

People had grown to completely disregard the Sabbath, treating it like any other day. Nehemiah was nearly speechless with fury and horror. This was exactly what had landed them in a seventy-year-long exile in the first place!

Nehemiah completely overhauled what was permitted on Sabbath Eve, as well as the Sabbath, purified the Levites, set up guards to protect the gate and keep the Sabbath day holy.