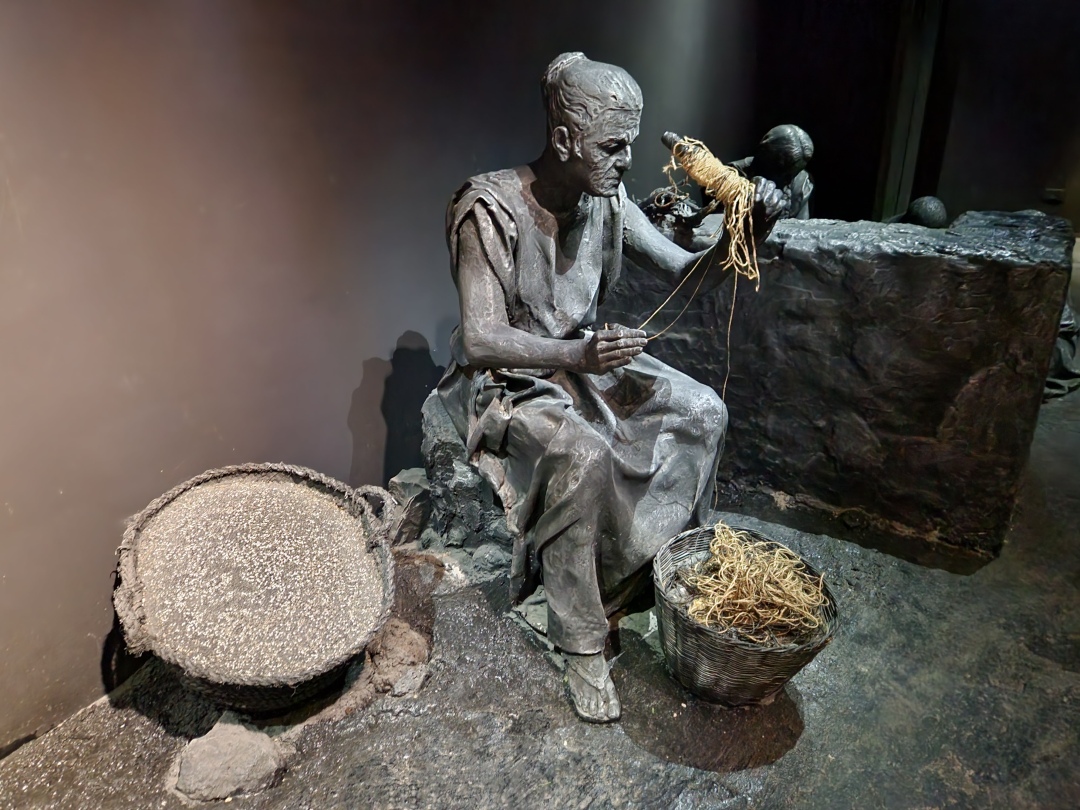 David and I are once again in Israel, the “Beautiful Land,” as the prophet Daniel described it.

The Museum connected with the Masada National Park provides narrative for both what it meant to be a Roman soldier in the first and second centuries CE, and what the rebels’ lives were like during their time on Masada. Friday was the exhibit on Roman soldiers. Today is about the Sicarii, the last of the Judean rebels known as Zealots.

Jesus loved Simon the Zealot, and called him as one of The Twelve.

Though the Zealot is not named in John’s Gospel, Luke recorded him as Simon called Zealot, which he later reiterated in his second scroll, Acts of the Apostles.

Interestingly, both Matthew’s and Mark’s Gospels call Simon the Cananaean, seemingly implying his hometown as Cana (you might recognize Cana as being the place where Jesus performed His first sign, turning water into the best wedding wine).

Then Jesus summoned his twelve disciples and gave them authority over unclean spirits, to cast them out, and to cure every disease and every sickness.  These are the names of the twelve apostles: first, Simon, also known as Peter, and his brother Andrew; James son of Zebedee and his brother John;  Philip and Bartholomew; Thomas and Matthew the tax collector; James son of Alphaeus and Thaddaeus;

and Judas Iscariot, the one who betrayed him.

Another disciple, Nathanael actually did come from Cana, so it is understandable that Jerome, a fourth century theologian, misunderstood the Greek word Καναναῖος | Kananaios to indicate a person from Cana rather than seeing it as a Hebraism. Both Kananaios and Kananites derive from the Hebrew word קנאי | qanai, meaning zealous.

Josephus Flavius, the first century Jewish historian, delineated four sects with the Judaism of his day.

A mystic Jewish sect, the Essenes developed their community over the course of three hundred years, which ended around the time of the sacking of Jerusalem in 70 CE. There were apparently thousands of adherents who lived in the Judean region, though fewer than the Pharisees or Sadducees.

Their distinctives included voluntary poverty, daily ritual cleansing in a mikveh, often celibacy (for those who would be priests), and a life of asceticism. They were known for their piety, strict observance of the Sabbath, and devoting themselves to charity, the study of scripture, and a life of peace.

It is the Essenes who lived in their own colony in Ein Gedi, the desert beside the Dead Sea, and who hid what would one day be called the Dead Sea scrolls

Phariseeism was more of a social movement, a life philosophy that came to be known as Rabbinic Judaism, and tried to bring the Levitical life into every home. Pharisees resisted Hellenization, were heavily Temple-oriented, and promoted a conservative interpretation of Torah. They accepted the whole of what we recognize today as the Hebrew scriptures, including the prophets and wisdom writings, and they believed in the resurrection of the dead, and in angels.

Josephus thought there were about 6,000 Pharisees in his day, and portrayed them as the people’s favorite, with such influence that whatever they said was believed.

Notable Pharisees in the Greek Testament are Joseph of Arimathea, Nicodemus, and Rabbi Gamaliel’s star student Paul the Apostle

The table was a common piece of furniture in the Greco-Roman period. It was made from various materials–wood, stone, metal–and was usually rectangular (having one leg) or round (having three legs). Tables are regularly seen in Hellenistic and Roman wall paintings.

This stone table has a central column-shaped leg with inlay, and the four corners of the stone top have the “gamma” decoration, which is also known from the contemporary tapestries and mosaics.

Herod had the finest tableware available in his time, hand-signed by the potter.

If Pharisees were beloved of the people, the Sadducees represented the elite, the wealthy, the aristocrats. Whatever the Pharisees were, the Sadducees were their opposite. They welcomed Hellenization, worked cooperatively with the Roman empire (and prospered because of it), only accepted Torah as scripture, rejected the oral law, and did not believe in the resurrection nor in angels.

Sadducees were both political and religious leaders, heavily represented in the Sanhedrin, and in control of the Temple.

The Zealots were unabashedly a political movement. They were zealous for God and zealous for God’s people and country. They actively rebelled against the Roman colonizers and repeatedly tried to expel Roman control of the Levant.

The movement was started in 6 CE (when Jesus was a little boy) by Judas of Galilee (also called Gamala) shortly after Idumea, Judea, and Samaria were all declared a Roman province.

Now here is what is so fascinating about the Sicarii. They were considered a splinter group of the Zealots, and were known as Sicarii because they hid small daggers called sicae in their cloaks. Like silent, stealthy assassins, they would blend in with the crowd then in a split-second strike of a snake, they would whip out their sicae to attack Romans, then disappear back into the crowd like a wisp of smoke.

Vessels made of stone were found throughout the Jewish settlements in Jerusalem, Judea, and the Galilee from the middle of the first century BCE until the destruction of Jerusalem in 70 CE, probably because Jewish law stipulates that stone implements do not contract impurity. The stone vessel industry, concentrated in the quarries in and around Jerusalem, produced ossuaries, tables, and different-sized containers, made either by lathe or hammer and chisel. These vessels were brought in before the siege of Masada. Masada Museum

As rebellion against Rome grew, the Sicarii’s terrorism and guerilla tactics increased, with kidnappings of important officials to demand the release of Jewish rebels and assassins, and acts of violence to foment violent revolt.

The Nabateans living in Edom (southern Transjordan) and the Negev (southern Israel) engaged in caravan trade along the Incense Route stretching from the Arabian Peninsula to the shores of the Mediterranean Sea. Nabatean potters produced fine pottery wares with “eggshell”-thin walls and red-painted decorations. Nabatean pottery vessels were found in the Roman siege camps surrounding Masada as well as on the mountain itself. They appear to have belonged either to the soldiers of the Nabatean auxiliary troops that joined the Roman army or to the Nabatean merchants who accompanied the soldiers. Petrographic studies indicate these wares originated in the region of Petra.

And it is the Sicarii who continued to hold down the nearly impregnable Masada fortification until their demise in 73 CE.

Not depicted here is the room where the ten ostracon (pottery sherds with writing on them) were found that contained the names of the ten men who, by lot, were chosen to oversee the suicide of every person on Masada, and then take their own lives. Also not depicted are those ten ostracon, now preserved in separate atmosphere-protected containers in a room of their own. They are a silent and grim memorial of the awful choice these last of the Judean resistance took as flaming arrows rained down around them, and the furious shouts of Roman legions thundered. The walls were being rammed through, stones and debris flying through the air, children screaming and crying, and resolute adults, men and women, with final resolve to die as God’s and not Rome’s.