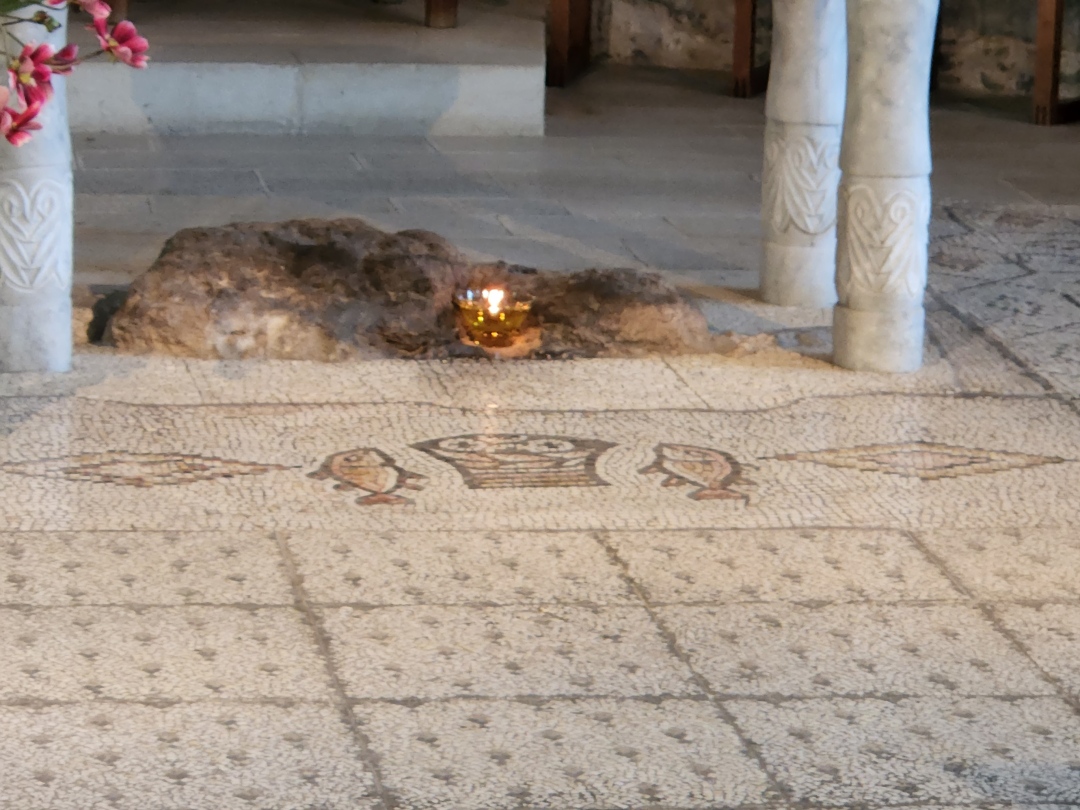 David and I are once again in Israel, the “Beautiful Land,” as the prophet Daniel described it.

Think about some of the really iconic stories about Jesus.

What just leapt to mind? Was it Jesus clearing out the temple? Jesus walking on water? The transfiguration? A healing story?

What about Jesus miraculously feeding a few loaves and fish to five thousand men—not counting women and children—on the shore of the Sea of Galilee? Unlike most stories found about Jesus (besides Passion Week), only a few make it into all four Gospels. But this story does, it is that central to the good news.

John’s gospel takes time to explain the significance of what Jesus intended with this miracle. It meant far more than Jesus’s compassion for the thousands of people who had foregone meals so they could stay and listen to His teaching.

Moses did not give the bread from heaven to you, but rather my Father gives the true Bread from Heaven to you: for the Bread of God is that which comes down from heaven and which gives life to the world.

It was a new aspect of the bread that would not perish. Not only would the bread itself last into eternity, but all who ate of it would also last into eternity. It was as though the prophet were speaking of the very Tree of Life, in the Garden of Eden, the precious gift God had forbidden to all humanity after the great disaster of humankind’s rejection of God’s sovereignty.

In fact, the importance of understanding Jesus as the Bread of Life was so crucial to John’s Gospel, and the importance of our participating in Christ’s life by daily eating of that sacred bread, that it is here we find his Gospel’s connection between bread and Jesus’s body, rather than at the Last Supper.

Now. What if, back in the first century, you knew very well where that momentous occasion had taken place? What if, in that day, it was place people began to gather to talk about the rabbi’s teachings?

What if this was also the very place Jesus went to, soon after His resurrection, to cook a breakfast of fish and hot bread for His disciples, after they had spent a long night of fishing?

“In the Byzantine period, the water of the springs at Heptapegon was collected in three water towers (Birket Ali edh-Dhaher at Ein Nur Spring, Hammam Ayyub, and Tannur Ayub) and sent via an aqueduct to the Plain of Ginosar, where it was used for irrigation; the three towers seem to be recorded in the mosaic floor of the 5th-century Church of the Multiplication at Tabgha.”

And what if, generation after generation, people still remembered that day, and that place, and continued to gather there?

Many of the earliest depictions of the Lord’s supper include both fish and loaves in commemoration of the Feeding of Five thousand, and for the hidden meaning of ichthys.

Fish as Code for Christ

Most people know about the fish symbol. A fish had several familiar connotations in the gospels.

And then someone realized the word “fish” in Greek created an anagram for Jesus, Messiah.

The word in Greek, when spelled with all capital letters, looks like this: ΙΧΘΥΣ

Transliterated into English letters, it spells: IXOYE, and sounded out, it becomes ichthys, which means (in Greek) fish.

In anagrams, each letter represents a word, like so:

Bread as Code for Christ

The loaf of bread also is an anagram for ichthys. Look how

Each letter can be seen in the cross-hatching. The last letter is the sigma, the top and bottom would be curved. But there is another letter that, in koine Greek, creates the “s” sound, called the Lunate Sigma. And you can see how it would fit.

The earliest known depictions of this code word and image have been dated within the first one hundred years of Christianity.

Originally, this place was known as Heptapegon, which means seven springs in Greek. But, over time, the name got shortened to Tapego, and because the language spoken there changed from Greek or Aramaic to Arabic, the sound of the word changed, too, softening to Tabgha.

And there must have been Christians there, in the early centuries of the Jesus movement, because by the four hundreds a Byzantine church had been built, with beautiful mosaics. These ancient artworks have been lovingly preserved by the attached monastery. Just outside the church doors, the vista spreads out to the Sea of Galilee.

Central to the sanctuary is the top of a large boulder hidden beneath the floor and a simple yet lovely rendering of two fish and a basket of small loaves.

The stone is said to be where Jesus lifted the bread and fish to bless them before breaking them and giving this miraculous meal to the hungry people arrayed around Him. Looking out the window, one can imagine that misty early morning soon Mary of Magdala’s earth-rocking message from the risen Lord, He is risen! And He says to go to Galilee where He will meet with us. The disciples had gone directly to that familiar place, the place of the promise, the miracle of the heavenly manna. All night they had spent fishing by this place, thinking about the Lord, and being reminded of His promise made on that day,

I AM the Bread of Life that came down out of heaven: whoever eats of this bread lives into eternity.

So then, the bread that I give is also my flesh on behalf of the life of the world.

And now, they look up as the aroma of broiled fish and warm-baked bread reaches them. Perhaps they see the Lord sitting on this very boulder, a small fire crackling, the reality of His life so prosaic in that setting and yet also so profound.