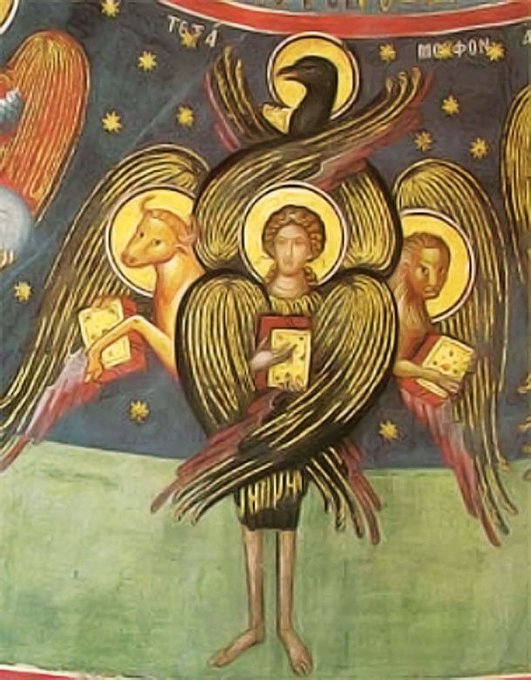 In this post I put the scene all together and search the scriptures of other accounts that describe God’s heavenly throne room.

After these things I saw, and behold a portal was being opened in the sky, and the first sound that I heard [is] as a trumpet speaking with me, saying, “Come up here, and I will show to you what must occur after these things.”

At once, I arose in air [or “came to be in Spirit”]: and behold, a throne was standing in the sky, and upon the throne one sitting,

And from the throne is coming bright shining lightnings and sounds and thunders—and seven torches, flames burning before the throne, which are the seven spirits of God.

And before the throne something like a transparent sea resembling crystal.

And in the midst of the throne and round about the throne four living-creatures being full of eyes in the front and on the back.

and the third living-creature having the face like that of a human,

Furthermore, the four living-creatures each one of them having six wings, and each round about and within being full of eyes―and they have no rest day and night saying, “Holy, Holy, Holy Lord God, the Almighty-Omnipotent, the One [Who] was, and the One [Who] is, and the One coming.”

And now, whenever the beasts will give glory and honor and thanksgiving to the One sitting upon the throne, the One living into the ages of the ages,

“Worthy are You, O Lord, and our God, to receive the glory and the honor and the power, for You created all things, and through Your will they were existing and they were created.”

Three other prophets (and most likely four) had been given glimpses of the throne room of God—(Noah), Moses, Isaiah, and Ezekiel, and all of them gave eye-witness testimony of their visions. Of these ancient reports, only two described the four living-creatures—seraphim—which attended God.

From the Prophet Isaiah,

“Holy, holy, holy is the Lord of hosts;
the whole earth is full of his glory.”

From the Prophet Ezekiel,

In the middle of it was something like four living creatures.

This was their appearance: they were of human form.

Each had four faces, and each of them had four wings.

Their legs were straight, and the soles of their feet were like the sole of a calf’s foot, and they sparkled like burnished bronze.

Under their wings on their four sides they had human hands.

And the four had their faces and their wings thus: their wings touched one another; each of them moved straight ahead, without turning as they moved.

Their wings were spread out above; each creature had two wings, each of which touched the wing of another, while two covered their bodies. Each moved straight ahead; wherever the spirit would go, they went, without turning as they went.  In the middle of the living creatures there was something that looked like burning coals of fire, like torches moving to and fro among the living creatures; the fire was bright, and lightning issued from the fire. The living creatures darted to and fro, like a flash of lightning.

Their rims were tall and awesome, for the rims of all four were full of eyes all around.

And of these two prophets, only Ezekiel described the transparent sea resembling crystal, and the great roar of sound John heard as he gazed upon the throne of God and saw the seven Spirits of God.

Over the heads of the living creatures there was something like a dome, shining like crystal, spread out above their heads.

Under the dome their wings were stretched out straight, one toward another, and each of the creatures had two wings covering its body.

The Throne Room of God

Reading through each of these accounts—and understanding how each prophet was given his own vision and described what he saw in his own way—we begin to see a whole picture.

We find out from Isaiah that these four living creature are called seraphim, and they indeed are the ones who continually offer up praise to God, singing, “Holy, Holy, Holy.” For Christians today, their three-time declaration gives honor to the triune God, Who is Father, Son, and Spirit.

Each living being presented a different face to John, that of lion, young bullock, human, and flying eagle. Ezekiel reveals each seraph has all four faces.

John saw eyes covering the seraphim front and back, and Ezekiel also saw eyes without and within, though to his view it seemed as though these eyes were on a wheel attached to each living creature.

Both Isaiah and John noted the seraphim’s six wings. Ezekiel perceived only four, but both Ezekiel and Isaiah saw the seraphim’s wings covered over the seraphim’s bodies, while other of their wings were raised up to God.

The seraphim’s worship begins the chorus of praise that sweeps across the elders.