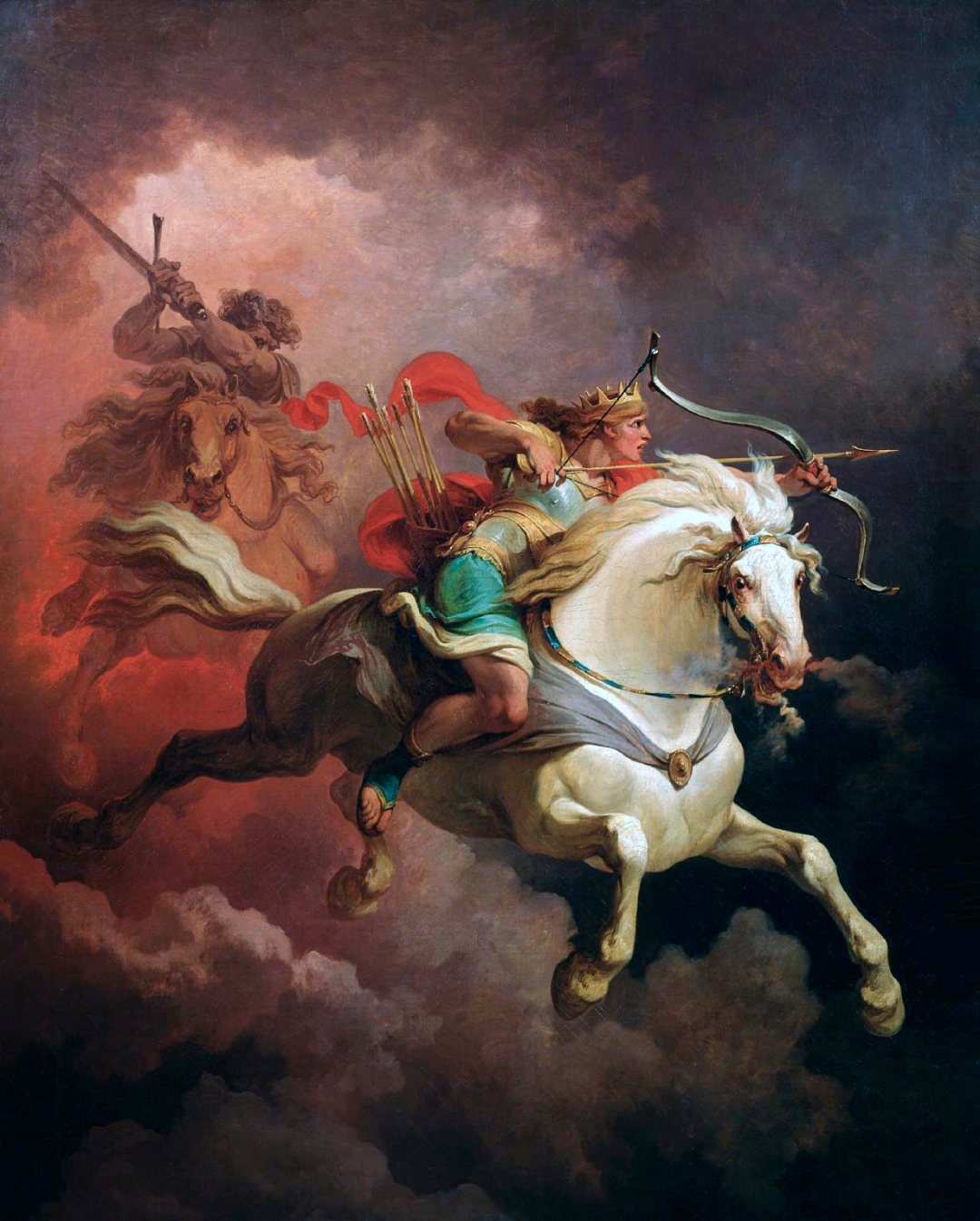 Then I beheld when the Lamb opened one of the seven seals, and I heard one of the four living creatures saying with a thunderous voice, “Go, you!”

Then I saw, and behold a white horse, and the one sitting upon it having a bow, and he was given a crown, and he went out conquering and in order that he would get the victory.

It seems as the whole of creation—the heavens and the earth, all creatures in every place, angels and humans, a host so vast it was beyond numbering—was swept up in rapturous praise of the Worthy Lamb, John noticed movement.

The Lamb was now moving the scroll into position and opening the first of its seven seals.

Even as the seal was being broken one of the four Seraphim spoke in a voice that rolled like thunder, and said, in Greek, one word: Ἔρχου | Erxou. It is a verb, in the present tense, and spoken as an imperative in singular second person. It is a command, and it was spoken with mighty force and power, with all the authority of heaven, and directed to an individual.

The verb is ἔρχομαι | erxomai, and it means either “to come” or “to go.”

Just one word, but depending on how it is translated guides the understanding of what John experienced.

Many translations see the living creature commanding John to come, perhaps for a better view. Several translations are so certain this must be the case, they add the words “and see,” which are not in the Greek.

Three translations have the living creature say “Come out!”

On the other hand, four renditions translate this command as “go.”

As I looked through dozens of translations, I came across an English version new to me—the Expanded Bible.

Then I watched while the Lamb opened the first of the seven seals [5:1]. I heard one of the four living creatures say with a voice like thunder, “·Come [or Go; C Christ, the Lamb, calls forth the four riders who bring bloody judgment on the world]!”

I looked, and ·there before me was [L look; T behold] a white horse. The rider on the horse held a bow [C signifying war], and he was given a crown [C indicating victory; see 2:10], and he rode out, ·determined to win the victory [L conquering and in order to conquer].

It makes the most sense for the living creature to be focused on what the Lamb was doing, and to be a part of the drama playing out before John. The words of the scroll are so powerful they seem to have the same creative energy as the word of God calling forth into existence. Imagine, then, John seeing the Word of God breaking the seal of the words of God and the dynamic energy of those words thundering with mighty power in the voice of the Seraph, “GO!”

His one forceful command draws John’s attention to a majestic rider who has appeared, crowned with a victor’s diadem, astride a magnificent, gleaming white horse, and holding aloft a warrior’s bow. He is like a king about to ride into battle. At the Seraph’s cry, he does ride, for “he went out conquering and in order that he would get the victory.” I like how the EXB reads that phrase—”he rode out, ·determined to win the victory.”

So, what was John seeing?

Scholars with this perspective see the white horse with its rider in reference to the Roman Empire from between 96 CE, following the death of Domitian, to 180 CE when Commodus made peace with the Germanic peoples. During this time period, there were five “good” emperors who expanded the Empire’s borders to cover almost all the regions that used to belong to the Babylonian, Persian, and Greek empires. It was a time of peace and prosperity for most of the known world, under Rome’s governance.

The rider’s bow may refer to Emperor Nerva (96-98) whose forebears, the Cretans, were known as bowmen.

Alternatively, commentators in this camp see the seals covering the lip of the scroll, much like seven pieces of tape holding down the lip of gift-wrapping on a box. No action takes place, they point out, until the seventh seal is broken in Chapter Eight. Characters are introduced, circumstances are described, but this is all in preparation for what will happen at the breaking of the seventh and final seal.

A modification of this view sees a progression of events leading up to the destruction of Jerusalem. Each horse represents war, so the breaking of the first four seals releases four horses’ worth of warfare—not four separate wars, or different kinds of war, but rather all the aspects of war in a single timeframe.

Some preterists see Vespasian on the white horse during the three years of war leading up to 70 CE (when Jerusalem was desolated). Vespasian’s crown of victory is given to him by God, who has passed judgment on Jerusalem and appointed Vespasian to enact that judgment.

Other preterists see Christ Himself on the white horse, enacting judgment against Jerusalem, as He had forewarned,

“for these are days of vengeance, as a fulfillment of all that is written.”

Theologians focused on the future understand the breaking of the first seal as launching a time of tribulation. Some believe it is Christ on the white horse—white being symbolic of Messiah, and victory pointing to spiritual triumph.

But others reject the notion of associating Jesus with war and famine. This viewpoint sees the rider as perhaps the governments of the world, or more likely, the Anti-Christ. The crown he is given is not of legitimate sovereignty but of conquest, and it is not God Who gives it, but Satan.

And then the lawless one will be revealed, whom the Lord Jesus will destroy with the breath of his mouth, annihilating him by the manifestation of his coming.

The coming of the lawless one is apparent in the working of Satan, who uses all power, signs, lying wonders, and every kind of wicked deception for those who are perishing because they refused to love the truth and so be saved.

These scholars note the world is Satan’s to give.

And the devil said to [Jesus], “To you I will give all this authority and their glory, for it has been given over to me, and I give it to anyone I please.”

One commentator likens the rider to the little horn in Daniel’s vision, and another to Daniel’s specific prophecy of a dark “prince who is to come.”

After the sixty-two weeks, an anointed one shall be cut off and shall have nothing, and the troops of the prince who is to come shall destroy the city and the sanctuary. Its end shall come with a flood, and to the end there shall be war.

The rider is, in this sense, the beast that will later come up out of the sea in Revelation 13.

Interestingly, though scholars who read spiritually seem to prefer the translation “Come!” for ἔρχομαι | erxomai, they do not associate it as a command for John to “come and see.” Rather, at the breaking of each of the four scrolls, one of the living creatures will cry out this command as a summons to call forth each of the horseman with the creative power of the words written in the scroll.

Another suggestion has the Seraphim crying out for the Lord Jesus to come, considering Jesus’s promise and the yearning of the redeemed act as bookends for the whole of John’s Revelation—”He comes with the clouds,” and “Come, Lord Jesus!”

In fact, almost all the early Bible commentators up to 150 CE saw this imagery as the Lord victoriously spreading the gospel across the earth. Today, many who do not see, specifically, Christ, see God’s sovereignty over the nations and governments of the world.