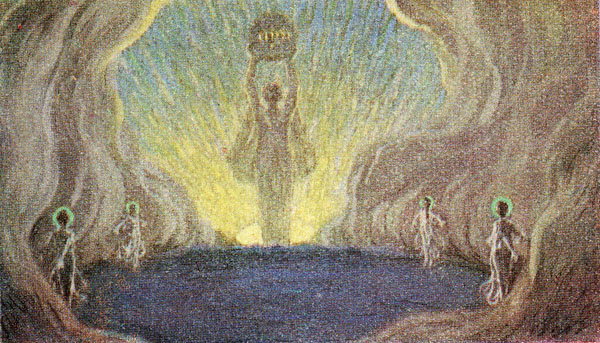 Then I saw another angel ascending from the rising sun, having a seal of the Living God, and the angel cried out in a great voice to the four angels to whom was given to them to harm the earth and the sea,

saying, “You may not harm the earth nor the sea nor the trees, until we seal for their protection the slaves of our God upon their foreheads.”

Each of the first six seals brought forth visions of fresh calamity—even the fifth seal which spoke of many more martyrs to come—until it was time for the opening of the seventh seal. However, before this final seal was to be opened, John saw an angel ascending with another kind of seal and a vital message of delay:

The next round of misfortune was to be released only after God’s seal of protection was applied to all of God’s own.

Chapter 7 still seems to be operating out of the sixth seal, so who are the four angels? What is this seal of protection? And what is this scene revealing about God, God’s people, and the world?

Perhaps the forehead, in each of these instances, might represent God’s protection of the believers’ minds, to stay true to right doctrine and remain faithful to truth.

Commentators who concentrate on the fall of Jerusalem as the focus of Revelation’s prophecies point to the question asked at the end of Chapter 6.

Because the Great Day of Their Wrath came, and who is able to stand?

This intermission is necessary because of the severity of calamities having so far befallen Judea, God’s apostate people.

Malachi had already prophesied of this question,

Who can endure the day of his coming, and who can stand when he appears?

“Who is able to stand?” is not rhetorical, but a very real query. How far would the disasters brought on by God’s judgments spread? Who else would be swept up in these tribulations, and would they survive them?

Therefore, the final sweep was stayed until God separated out the Lord’s own faithful ones and sealed them with God’s protection.

Preterists remind us that Jerusalem was sacked twice. The first time by Babylon in 586 BCE, and the second time by Rome in 70 CE. Both of those times, the very seat and sacred place of God was torn asunder, stone by stone, looted, and burned to the ground.

Before the first invasion, the Babylonian subjugation, God had miraculously marked and set apart the Lord’s own faithful ones. Ezekiel had seen it in his vision. God was about to send executioners throughout Jerusalem, but before they were to go, God called a man with a scribe’s gear to come before the Lord, saying,

“Go through the city, through Jerusalem, and put a mark on the foreheads of those who sigh and groan over all the abominations that are committed in it.”

To the others he said in my hearing, “Pass through the city after him and kill; your eye shall not spare, and you shall show no pity. \Cut down old men, young men and young women, little children and women, but touch no one who has the mark.

“And begin at my sanctuary.”

The similarity to John’s vision cannot be ignored, these interpreters point out. Now, just as before, a vision has been granted of the Lord marking God’s own for protection just prior to the destruction of Jerusalem and the sweeping away of God’s sacred sanctuary.

Because “Who is able to stand?” is not rhetorical, God provided the concrete answer. Just as in the days of the Babylonians, I the Lord will protect My own. Those marked with My seal will stand.

These Jewish believers, trapped for a time in Jerusalem, would be spared its final end, a fact recorded in history.

Some historicists agree with preterists in seeing the four winds as the worst of the evil that would blow through Judea and Jerusalem. God held back this final blast until all the Christians could escape to safety.

Alternatively, theologians who look to future fulfillment tend to take a more literal view of John’s vision, keying in on the four angels, the four winds, and the corners of the earth, or more accurately in their view, the four quarters of the earth.

John has offered evidence that angels have authority to control the natural elements of earth—wind (tornadoes, hurricanes), fire, earth (earthquakes), stone (volcanoes), heat, and cold. And these angels are not to wreak havoc with the wind, but rather to hold back the cyclone of God’s fury from tearing across the whole of earth.

For some futurists it is here, at the midpoint of the seven years of Tribulation, when the Lord’s faithful will be lifted up to safety with Jesus in what is called the Rapture. Though others will come to a saving faith during the remaining time of earthly trouble, it will be as a result of terrified conviction in the face of God’s fearsome judgment.

Scholars who take the spiritual view do not see a sequence of events in John’s comment, “After this I saw …” but only the sequence of the visions. The four angels, then, can be identified with the four horsemen of the first four seals being asked to wait before they proceed with God’s sending command. Such commentators see a similarity in John’s vision with Zechariah’s vision.

And again I looked up and saw four chariots coming out from between two mountains—mountains of bronze.

Then I said to the angel who spoke with me, “What are these, my lord?”

The angel answered me, “These are the four winds of heaven going out, after presenting themselves before the Lord of the whole earth.”

As with Futurists, spiritual-minded interpreters see John’s (and Malachi’s) question as genuine. Who will stand under the awful judgments of God?

The answer, according to Ezekiel and to John, is that the faithful will stand under it, protected by God, as the Lord’s people have in every age.