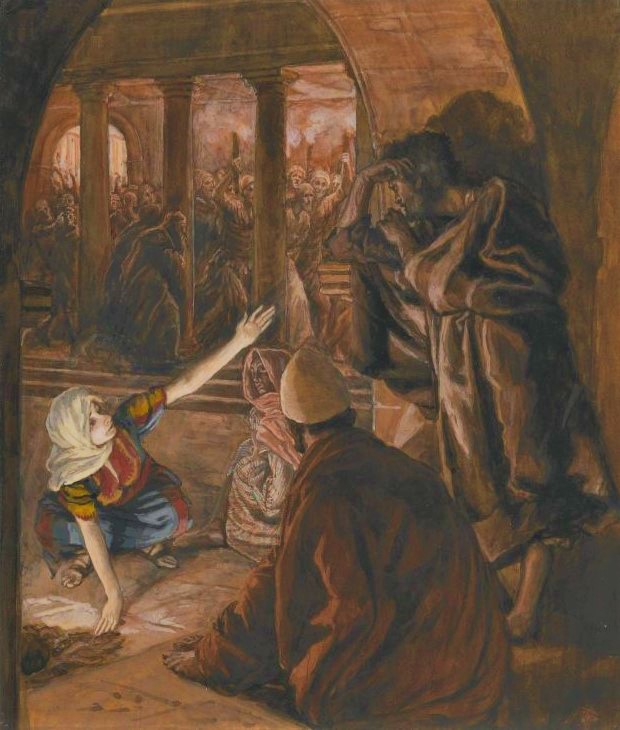 At last they were there. Once at Mark’s house, they had seen none of the others, not even James or Phillip. All had scattered. Maybe some are in Bethany, John thought, perhaps with Lazarus and his sisters, or perhaps in another near-lying town. Peter shook his head as he and John walked towards the high priest’s quarters. Had he not told the Master he would never desert him? Never! Had he not proven his courage and valor! And here Peter unconsciously felt for his short sword. Miraculously, none of the soldiers had divested it of him.

John was lost in his own thoughts, intent on how he would gain entry once they had reached the compound. Gate privileges went to a select few, but John’s family, wealthy, god-fearing, and clients of the high priestly family, were in good standing at his house. John’s father Alphaeus had always provided the best fish, and in generous portions, for Annas’s tables, and now for Caiaphas. Alphaeus’s father and grandfather before him had been generous benefactors to the temple’s treasury, and every festival James and John had carried ample thanksgiving offerings to the treasury house in the Court of the Women, together with their mother and father, and their siblings.

Now, John would count on a favor from the servants of their patron.

Soon, they were crossing the Red Heifer Bridge, and making their way through the mount to the high priest’s complex. John, being well-known, raised his hand in greeting as servants watched their approach. Tonight, amid the thick aroma of temple incense and the sharp odor of torches, John sensed the same soft, clean scent of the spring breeze that had surrounded the rabbi’s healing of Malchus’s ear. Jesus must be near!

Peter grabbed John’s arm as they both glimpsed the Master ahead of them, standing in the courtyard outside Annas’s house. “There,” he said, in a fierce and hoarse whisper, pointing. John nodded, then quickened his pace. Stay here, he motioned to Peter and he moved ahead to speak with a servant. Soon, John was through the gate and disappeared from view, as Peter, anxious and apprehensive, tried to blend with the shadows outside the door.

When John returned, many minutes later, he spoke to the girl standing sentry by the entrance and waved his hand for Peter to come through. But before Peter had even gotten close enough to speak to him, John was gone again.

The way John wrote this passage shows how what was happening in the courtyard and inside the house was going on at the same time. Since John was known to the high priest, he was able to get into the high priest’s courtyard, and he got Peter in, too. As the servant girl at the gate knew John, it was perfectly natural for her to think that Peter was also connected to Jesus. Little did she know how much her frank and open question had startled and unsettled Peter.

And so it went, another girl saw him and asked him the same question, and this time he had to stick to his answer, he denied it a little more strongly. Peter was nervous and fearful, wandering all over the courtyard, trying to overhear what was going on, going from group to group.

It was cold, still being the spring, so a fire had been kindled in the middle of the courtyard. Servants and officials alike were gathered together around the fire, waiting to hear the results of the proceedings going on inside. Peter stood with them.

Some people recognized his Galilean accent—was Peter not one of the Galileans who went around with Jesus? Then, most damning of all, a servant of the high priest, one of the armed men who had gone with Judas to Gethsemane and a relative of Malchus, recognized Peter’s face.

“Did I not see you in the garden with him?”

This third time Peter was challenged in such a way that the man was accusing Peter of not telling the truth. Now Peter was in a fix and began to swear that he did not know Jesus. In that instant, the rooster crowed.

It was now early morning, the Sanhedrin could finally convene legally, in the temple, to make an official verdict of death. Right at that moment Jesus, who was being led out of Caiaphas’ house, looked into Peter’s eyes with the same searching, loving look he had given to the rich young ruler months (or years) before.

As Jesus looked deep into his heart, with forgiving love, Peter broke down and wept, bitterly.

Jesus already knew what Peter was going to do. Remember what Jesus said to Peter: I have prayed for you, Simon, that your faith will not fail, and that when you turn back you will strengthen your brothers.

Fortunately, God recognizes that failure is part of the human experience.

Scripture does not say that wise people do not fail. Here is what scripture actually says about failure.

For a righteous person falls seven times and rises again

After his resurrection, Jesus met privately with Peter and restored him to his discipleship. Jesus also publicly restored Peter. Knowing this story about Peter, his experience of falling and having Jesus help him back up, deepened Peter’s courage and his faith. What he learned is reflected in his later letters: pay attention to God’s word, watch and pray, and put no confidence in your own strength.

Think of those situations that seem to be out of control, we just react, maybe out of emotion, maybe out of stress. Even in the middle of a crisis. It is never too late to take a moment to pray.

The difference between Peter and Judas was their relationship with Jesus.

Often you and I might try to hide the truth from ourselves, because we cannot stand to think that we are really capable of something base and wrong.

Whatever it is, something said, something done, something not done, or even something secretly cherished that we know is wrong. Sometimes old, unconfessed guilt, or simply something that makes you or me feel bad inside. Our relationship with Jesus is going to determine how you and I handle the realization of our own guilt.

Repentance means radical, profound change by turning away from the old and entering into the new.

Remorse and penance attempt to pay for the sin, emotionally and materially, without in any way changing things, so that we will very likely do the same thing again in the future.

Distress that drives us to God turns us around. It gets us back in the way of salvation. We should never regret that kind of pain. But those who let distress drive them away from God are full of regrets.

One thought on “Gospel of John: Denied Three Times”