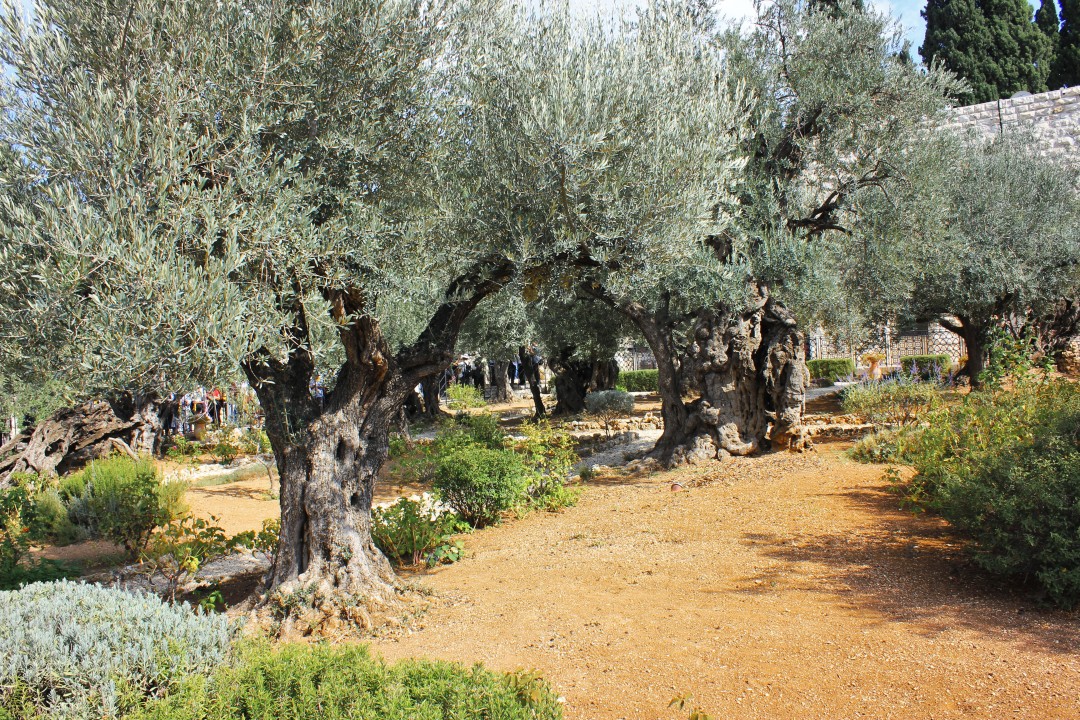 Zechariah is remindful of the donkey, bringing to mind his famous prophecy of the Lord coming in peace, riding on a donkey.

An angelic guide helped Zechariah understand what God was showing him, throughout the night.

But what did it all mean?

Vision 5, The Lampstand and the Olive Trees

The angel who talked with me came again, and wakened me, as one is wakened from sleep.  He said to me, “What do you see?”

And by it there are -two olive trees- one on the right of the bowl and the other on its left.”

I said to the angel who talked with me, “What are -these- my lord?”

Then the angel who talked with me answered me, “Do you not know what these are?”

He said to me,

“This is the word of the Lord to Zerubbabel: Not by might, nor by power, but by my spirit, says the Lord of hosts.  What are you, O great mountain? Before Zerubbabel you shall become a plain; and he shall bring out the top stone amid shouts of ‘Grace, grace to it!’”

Moreover the word of the Lord came to me, saying, ‘The hands of Zerubbabel have laid the foundation of this house; his hands shall also complete it. Then you will know that the Lord of hosts has sent me to you. For whoever has despised the day of small things shall rejoice, and shall see the plummet in the hand of Zerubbabel.‘

“These seven are the eyes of the Lord, which range through the whole earth.”

Then I said to him, “What are -these two olive trees- on the right and the left of the lampstand?”

And a second time I said to him, “What are -these two branches of the olive trees- which pour out the oil through the two golden pipes?”

He said to me, “Do you not know what these are?”

Then he said, “These are the two anointed ones who stand by the Lord of the whole earth.”

What Does it Mean?

Straightaway, Zechariah was drawn to the two olive trees, standing on either side of the lamp, through which abundant oil poured in two continuous golden streams into the golden bowl, and through the bowl to each of the seven brightly burning wicks.

As sparkling and effervescent as the seven shining lamps were with their splendid flames, and the luminous golden bowl with its pungent and swirling oil, Zechariah immediately asked about the trees. As soon as he saw them, he asked in wonder, “What are these?”

His question pleased God, for in the next breath, Zechariah was given an oracle. The angel introduced it by the instantly recognizable, This is the word of the Lord.

The Lord gave Zechariah four promises that he was to deliver to the prince and governor Zerubbabel.

What would be accomplished would come through the Lord’s supernatural empowerment.

It would not be possible, otherwise, for not only were the surrounding people groups hostile to the returning exiles, it was not in their best interests for Judah to be rebuilt.

God’s Spirit was well-known to God’s people, for they would have remembered the Spirit hovering over the void in Genesis 1, the sanctified anointing of kings and prophets, and the miraculous empowering of those who built the original tabernacle during the wilderness years.

The Lord spoke to Moses: See, I have called by name Bezalel son of Uri son of Hur, of the tribe of Judah: and I have filled him with divine spirit, with

—knowledge in every kind of craft,

—to work in gold, silver, and bronze,

—in cutting stones for setting, and

—in every kind of craft.

Moreover, I have appointed with him Oholiab son of Ahisamach, of the tribe of Dan; and I have given skill to all the skillful, so that they may make all that I have commanded you.

It is this same promise God was now giving to Zerubbabel, through Zechariah the prophet, as he led the consecrated and noble work of rebuilding the temple.

The living rock of the surrounding mountains would release their great stones to the work of the Lord.

By the same token, the mountain of rubble facing the people would be leveled in the power of God, and the holy temple of God would rise up in its place.

Finally, the top stone is reminiscent of Jesus (as the last verse will reveal), in keeping with the Apostle Peter’s declaration.

Come to him, a living stone, though rejected by mortals yet chosen and precious in God’s sight, and like living stones, let yourselves be built into a spiritual house, to be a holy priesthood, to offer spiritual sacrifices acceptable to God through Jesus Christ. For it stands in scripture:

“See, I am laying in Zion a stone,
a cornerstone chosen and precious;
and whoever believes in him will not be put to shame.”

What God had begun would indeed be accomplished, as the Apostle Paul would proclaim, five centuries later.

I am confident of this, that the one who began a good work among you will bring it to completion by the day of Jesus Christ.

This plummet line had shown up in a previous vision, remember?

Zechariah had envisioned the Holy City, and a man measuring that vast cityscape, which seemed to have no end.

It was a magnificent, prophetic reassurance of the enduring work of God done by the people of God, for what they were doing would extend far beyond their lifetimes, far beyond the scope of rebuilding the walls and temple of Jerusalem.

What they were embarking upon would have cosmic implications that will last for all eternity.

But, Zechariah wanted to know, what (or who) do the two olive trees represent? His heart was keening, there was something about them he longed to have revealed. And again he asked, now for a third time, what about these two trees?

The suspense and sense of anticipation had built up over fourteen verses!

These are the two anointed ones who stand by the Lord of the whole earth.

The angel to Zechariah, Zechariah 4:14 (NRSV)

These two trees, through whom the river of spiritual anointing and sacred power flowed, through whom the golden bowl was continually replenished, and the lights of the seven lamps kept ever aflame, these were the two anointed ones, Zerubbabel and Joshua, the governor and the high priest, chosen of God to lead the Lord’s people into the glorious destiny God held out to them.

Together, they foreshadowed the One Who would come as Priest and King one day, Jesus the Messiah.

[Very old Olive trees in the Garden of Gethsemane, where according to the Bible Jesus was praying before crucifixion. | By Beko – Own work, CC BY-SA 4.0, https://commons.wikimedia.org/w/index.php?curid=75788196%5D