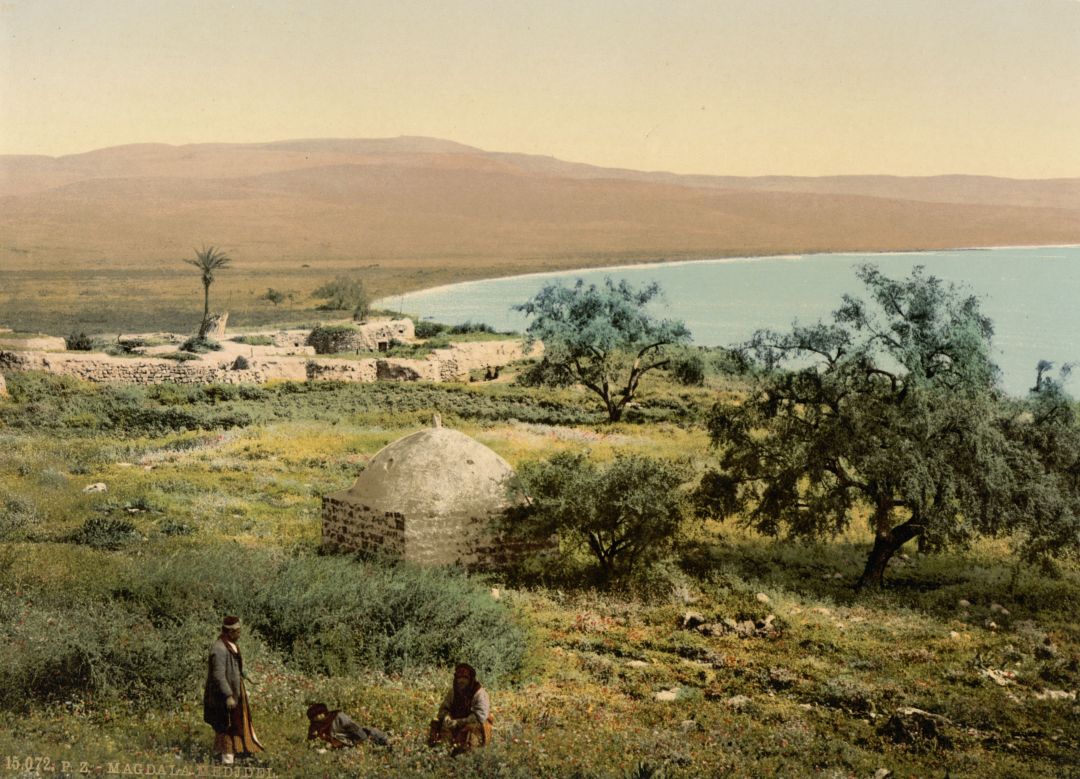 Part of our excursion last Saturday was to visit the once bustling and wealthy city of Magdala, where Mary of Magdala came from. It’s a beautiful settlement, made all of black basalt, which is plentiful in the Galilee from ancient volcanic activity.

One of the buildings was actually an olive press, with two vats, one for the first press, and one for the second on each side of the olive press itself.

The stone in the middle would have had a bar going through it attached to two animals which would walk in a circle, causing the stone to evenly mash the olives. The puree would then be strained into the vats, with narrow channels making it possible to sift out the pits and other matter.

I’ve been thinking a lot about that Mary, so thought I’d spend the next couple of days talking about her.

In Aramaic, the word ‘Magdala’ means elegant, great, or tower. It was a prosperous sea village nestled in the foothills of the Arbel cliffs, along the shore of the Sea of Galilee. Magdala, also known by its Greek name of Taricheae, was strategically located along the ancient road that connected Netufa valley through Gennesareth Valley to the Sea of Galilee.

Magdala was also close to where Jesus spent the majority of His three years in the public eye, healing, teaching, and performing miracles. The Lord had called His first five disciples from the little fishing town of Bethsaida, also on Galilee’s shore, and only about three miles from Peter’s home in Capernaum, where Jesus set up His home base.

The seven hills, all around Galilee, where these and other towns and cities were located, were lush with farmland, stands of trees, and verdant pasture lands. Picture fishermen in their boats, Jewish seaside cities, Roman soldiers, and crowds gathering to hear the words of a humble Rabbi from nearby Nazareth.

Mary’s first encounter with Jesus was as a deeply troubled, severely afflicted woman, in the grip of and suffering from seven demons. We can only imagine how desperate her family had become in their desire to see her healed, and freed of her disorder. Though Jesus’ reputation as a healer and miracle worker was swiftly spreading, people of that day felt the same cautions we do today when something seems too good, too impossible, to be true. Yet desperate people flocked in droves around Jesus, at the nadir of their wretchedness, knowing Jesus was their only hope. Jesus was Mary’s only hope.

After that first powerful, life-changing meeting, Mary became a life-long supporter and disciple of Jesus. She not only played a large role in financing His outreach, she also accompanied Him on at least some of His speaking tours.

Mentioned fourteen times, in all four Gospels, Mary was a prominent member of Jesus’ inner circle of 120 adherents. When she is listed among the women who were devoted to Jesus, her name is almost always placed first, seemingly implying she was first in service, first in support (only once is she listed after other names—Mary, the mother of Jesus, and Mary Jesus’ aunt).

It seems Mary became a part of Jesus’ larger circle of supporters early on in His public ministry. For possibly nearly all of the three years Jesus evangelized, taught, baptized, healed, and freed people, Mary was there to quietly learn, serve, and facilitate out of her own means.