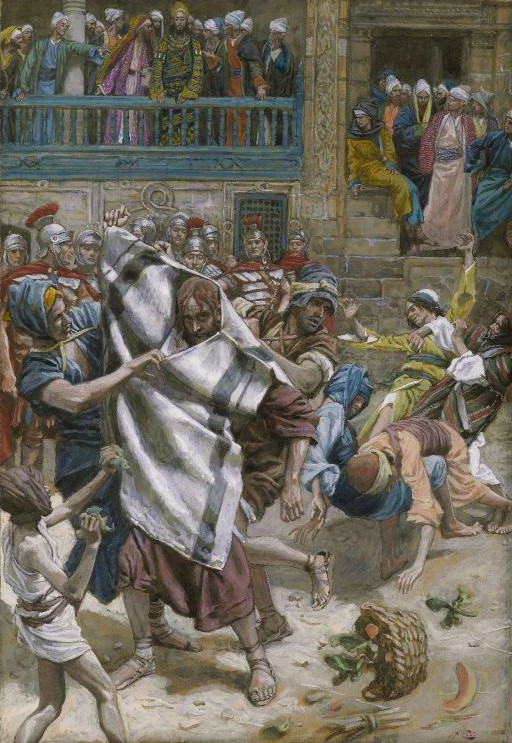 The chiasm outlined by Jo-Ann A. Brant has a classic seven-point structure.

A Exterior: John 18:29-32, Jesus is brought to Pilate with a demand for execution; Pilate refuses

Pilate had by now conducted his first, unsatisfactory, interview with Jesus and returned disgruntled to the small company of temple elite waiting for him at the entry to Fort Antonia’s attached palace. In their exchange, he learned Jesus was from the Galilee. It was welcome news. Pilate would now send Jesus to the court of Herod Antipas, just a few minutes’ walk, and he could be rid of a case that unsettled him, and threatened to enmesh him in the Judeans’ viscous religious affairs.

In John’s chiasm, the third line, “C,” does not include this interlude at Herod’s court.

John followed at a distance, easy to do since he knew where they were headed, and the plaza was by now filling with Passover lambs, and families seeking to purchase and offer their sacrifices. Lines had formed to the many tables overseen by the money changers, people garbed in cultures from across the Roman empire. Doves flapped and cooed, merchants at their various stalls hawked their wares, would-be prophets and preachers called out from the massive steps leading up to the temple’s entrance, and both temple guards and Roman soldiers milled among the masses, armed and alert.

As he walked, John wondered where any of the others were, where Peter might be. It was strange to be alone. He found himself stopping and scanning the crowds every little while until he reached the bridge. Far ahead of him, the guard had the rabbi, John could tell where they were by the way others looked away, studiously not looking, yet giving way as they headed towards the temple.

Once over the bridge, even the air smelled differently, no longer a heady mixture of sheep and incense. John breathed deeply, then realized he was both thirsty and hungry. A kiosk at the foot of the bridge offered small barley loaves for a coin, and John drank from a nearby public fountain. Just ahead was Herod’s palace.

The guard took Jesus to the back of the royal residence, where he would be remanded, and John made his ways to the servants’ entrance. As he walked he saw the procurator with his entourage enter by the front gate, his purple robe flowing behind him, and both Annas and Caiaphas with their own coterie not far behind.

John gratefully accepted entry, several there recognized him for the years of bringing the finest preserved fish from the Sea of Tiberias. Many of the servants had also traveled from Caesarea, where John and his brother James often brought their fish. John caught the eye of a servant he knew was sympathetic to the Master, and motioned to him. Once together, John pulled him aside. They have brought the Master here, arrested him in the night, tried by the Sanhedrin and found guilty of heresy. John watched the other’s face. The servant grew still and grave, even as a small commotion began in the archway to the servants’ area.

Suddenly John’s acquaintance was pulled away, the servants were bustling, some out to the kitchen, others to the wine cellars, several more to gather small tables, cushions, and inlaid chairs. Another group were hastily gathering supplies to sweep out and prepare the Praetorium, and to drape the Seat of Judgment with royal vestments. It seemed a prisoner had been brought, and the procurator would sit in court earlier than expected.

In the confusion, John easily made his way to the back access of Herod’s formal hall, intuiting they would bring his rabbi there. Even as he slipped into the shadow of a pillar, he saw the guards leading Jesus into the room, distinct in his calm with armed men clanking all around him. John suddenly leaned heavily against the stone column, light-headed and dizzy. There was a strange unreality to being inside Herod’s royal court, to seeing the Master standing in chains, dark brown spatters on his garment, and John utterly alone for the first time he could remember. In that moment, as he looked across the large expanse of room, he saw Joanna looking back at him, her husband Chuza, Herod’s steward, by her side. She gave a small, unsmiling shake of her head. Today, their association would be a secret.

He felt hot and shaky, yet his hands were cold, and he rubbed his damp palms against his outer robe. As he moved, the tassels of his prayer shawl rustled and caught his attention. Oh Most High, Judge of all people, please cause the rabbi to find favor with the king. John whispered the words, having shrugged his shawl over his head, and bowed before the Almighty. All around him, others were gathering, servants, vendors who had been bringing in foodstuffs and wine, folk who were friends with those inside. The outer area of the court was also quickly filling with the curious who had watched the Roman cohort march Jesus through the outer temple complex and into Herod’s palace.

Then Herod Antipas made his entrance, Herodias as lovely and dangerous as a leopard by his side. It was early for the tetrarch, who enjoyed his wine and late night entertainment. John could see the hollows under his eyes, and the paleness of his face as he made his way to their intricately carved thrones, richly adorned in brocaded gold and Tyrian purple. But when Jesus was brought forward and made to stand before the royal dais, Herod’s demeanor quickened, and he leaned forward with a wide grin.

It is the one the Baptist spoke of! Herod crowed with delight. Herodias’s lips thinned, more grimace than smile. Jesus, is it not? Herod, still leaning forward, had directly engaged with the prisoner. Both sentries stepped slightly away, leaving Jesus alone before the tetrarch. The Master held Herod’s gaze, silent and still, as though time was not measured near him. Morning light, as white as glowing pearl poured with gleaming radiance through the windows all around Herod’s meeting hall, splashing the inlaid marble floor with a freshness that almost carried the scent of spring, of trees in bud, and fields green with young wheat.

Imperceptibly, as the sun shifted in the sky, a great beam of light moved to fall on the rabbi’s simple peasant shift, and suddenly Jesus was luminescent, even his black hair shining with an otherworldly glow, and his dark eyes pools of eternity, their quiet power mesmerizing.

As the moments drifted into minutes, and time pushed itself on, Herod’s eyes began to harden, his eager smile of anticipation began to fade, and his face became veiled. Slowly, he leaned back in his chair, and laid his hands on the armrests.

I hear you work grand miracles. He studied Jesus, who stood comfortably at ease, his hands hanging loosely by his sides, his feet slightly apart. I have a servant here, whose foot was crushed. Heal it for us! Herod had kept his eyes on the rabbi, but by the smallest movement of his hand had summoned a young lad with half his leg and foot wrapped in a bundle of bloodied cloth strips. The boy timidly approached, and Jesus gave him a kind look, but turned his attention back on the tetrarch.

Are you not a healer? Have you no heart for this poor child?

Jesus gave him no answer, as tranquil and still as a summer sky.

Well, then. I hear you are planning on tearing down the temple! How will you do it? Who are your workmen? What architect have you secured for rebuilding it in a single day?

Herod laughed heartily at his own witticism, looking to Herodias first for her rejoinder, which she gave without enthusiasm. Caiaphas could no longer contain himself, hurling invectives at the ill-mannered itinerant preacher who refused even the most minimal courtesy to the son of Herod the Great and his wife, one of the last of the Hasmonean royal dynasty. Others of the Sanhedrin joined in, shouting their vehement accusations. Though Annas at first had reached out a hand to stay Caiaphas’s arm, he also raised his voice, but in explanation. He is a heretic and a blasphemer, and he is proving himself a fraud!

A rumble had begun, moving like a wave across the room, from vexed and peevish onlookers discontented the prisoner would provide no sport.

Herod, too, had begun to tire of Jesus. Why do people follow you? A dumb prophet who neither moves nor speaks. King of the Jews, the procurator tells me. Herod snorted. Of which Jews? A few Galileans, a Zealot and tax collector. Oh, pardon me, and one Judean who seems to have tired of you. And here Herod smiled slyly at Caiaphas, who reddened and looked away in irritation. Their arrangement with Judas had been done in secret, but Judas’s very public change of mind had embarrassed them.

Herod’s late night, indulgence in food, and overgenerous libations of strong drink were taking their toll. He turned disconsolately in his chair, sitting first on one side, then the other, his pale face begun to glisten. He had run out of barbs, and suddenly the room felt close and hot, despite the cool of the morning. He waved his hand to the captain of his own guard. Let us get this little king dressed for court.

Soon chortling soldiers were tying an elegant robe around Jesus’s neck, filched from Herodias’s discarded clothing. Nearly the whole guard burst out in laughter, and Herod laughed, holding his stomach. For the first time, Herodias’s chuckle was genuine, and even Caiaphas and Annas could not hide their satisfaction.

Bring him to the Praetorium. Herod yawned widely, and taking Herodias’s hand in his own, he rose and made his way through a private exit to his royal quarters. He had long considered Pilate an enemy—one he had tried to keep as close as possible. But now, he thought, I think we will be friends.

One thought on “Gospel of John: Herod’s Court”